A school exercise seems to have roused the ire of creationists. It included a statement about common creationist behavior. 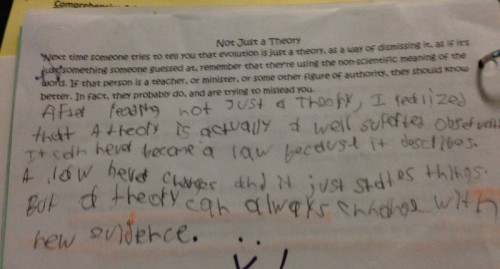 Not Just a Theory

Next time someone tells you evolution is just a theory, as a way of dismissing it, as if it’s just something someone guessed at, remember that they’re using the non-scientific meaning of the word. If that person is a teacher, a minister, or some other figure of authority, they should know better. In fact, they probably do and they are trying to mislead you.

I would like to see some clarification of the objection.

I would not like to be in the position of making a case against that statement. It’s actually accurate, and the alternatives are ugly.

But of course, school administrators chickened out and reassured the idiot parents that the statement would no longer be used in future worksheets. So I’d also like to know…are they intentionally keeping their children ignorant and wrong, or are they just stupid?

Rush Limbaugh must be desperate to emulate Alex Jones » « Practice what you preach, Matt Damon