I quite annoyed one of the authors of that “Kill All The Predators argument, who butted heads with me on Twitter and told me I had to go read this longer essay by Jeff McMahan which would address all my objections, because philosophers all seem to think that if they can babble long enough, they’ll ultimately be persuasive. Spoiler alert: it just made the problems with their idea wordier.

In particular, I was told to read section 3 and 4, which deal with objections to their argument. So I’ll just address that bit here, because I think their defense is dead with the second sentence.

The challenge to this simple case for intervening against predation is that it must be able to withstand the many objections that have been urged against it, including those that consist of moral reasons not to intervene. The most common of these objections is that the complexity of any major ecosystem so far surpasses our understanding that an attempt to eliminate predators within it, however carefully planned and well intentioned, would have unpredictable and potentially catastrophic ramifications throughout the system, extending, perhaps, into other ecosystems as well. The most obvious scenario is that the elimination or even significant reduction in predation would produce a Malthusian dystopia in which herbivore populations would expand beyond the ability of the environment to sustain them. Instead of being killed quickly by predators, herbivores would then die slowly, painfully, and in greater numbers from starvation and disease. Rather than diminishing the suffering and extending the lives of herbivores, the elimination of predation might increase their suffering overall and even diminish their average longevity. We can call this the counterproductivity objection.

This purely philosophical exercise founders on empirical reality. They claim that an objection is that stripping the predators from an ecosystem would have unpredictable and potentially catastrophic ramifications — this is incorrect. It would have known, predictable, and definitely catastrophic effects. In case you hadn’t noticed, humans have been busily pauperizing biodiversity in various habitats for a long time, and the changes have been measured and are obvious: knocking out whole species has a devastating series of consequences on the environment. The MacAskills and McMahan are playing a game involving a fantasy universe with very little connection to the real world, which is fine…except when they start making policy recommendations for our universe. 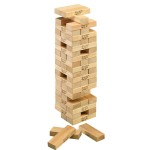 They’re playing magic Jenga. Their proposed strategy is to, for instance, focus on removing all of the pieces from just the third row from the bottom. They know they can remove one piece and the tower won’t fall down, so hey, that implies that removing all of the pieces from that level will be safe, especially since in their philosophical universe gravity is irrelevant, the relationship between the different pieces doesn’t matter, and stability and balance are completely mysterious concepts.

They try to get away with it by casting doubt on known facts: they use “might” a lot. Well, if we remove that entire row, it might fall down. But maybe it wouldn’t! They get to ignore all the facts about the physics of this system because they’re bad philosophers, and all that matters is finding logical and rhetorical loopholes to permit their desired result to exist in their heads.

The way they get around ecological reality is to make the claim that someday Science might find a way to get around these current problems.

Given the state of our knowledge at present, this seems a decisive objection to almost any attempt to reduce predation now. But we should not be dismissive of Isaiah’s gifts as a prophet. Ecological science, like other sciences, is not stagnant. What may now seem forever impossible may yield to the advance of science in a surprisingly short time – as happened with Rutherford the first scientist to split the atom, announced in 1933 that anyone who claimed that atomic fission could be a source of power was talking “moonshine.” Unless we use Rutherford’s discovery or others like it to destroy ourselves first, we will almost certainly be able eventually to eliminate predation while preserving the stability and harmony of ecosystems. It will eventually become possible to gradually convert ecosystems that are now stabilized by predation into ones resembling those island ecosystems, some quite large, that flourished for many millennia without any animals with a developed capacity for consciousness being preyed upon by others. We should therefore begin to think now about whether we ought to exercise the ability to intervene against predation in an effective and discriminating way once we have developed it. If we conclude that we should, that may give us reason now to try to hasten our acquisition of that ability.

Has anyone read the short story, “Poor Superman”, by Fritz Leiber? That. It’s the idea that science is all about wish fulfillment, that we can get whatever we want if we just science the heck out of it, or if we can’t do that, we put up an illusion of sciencing in the expectation that someday reality will align with our desires. Some things are simply not possible, and that other things are does not imply that everything is.

I have to mention the reference to Isaiah. Jarringly, the essay cites a fucking prophecy by a Biblical patriarch as if it somehow adds credibility to their argument. It’s really weird.

This is not an empirical fact about biology.

The wolf will live with the lamb,
the leopard will lie down with the goat,
the calf and the lion and the yearling together;
and a little child will lead them.
The cow will feed with the bear,
their young will lie down together,
and the lion will eat straw like the ox.

That they keep bringing it up in the essay is a bit off-putting. I suspect some hidden religious bias in their ideas that they try to keep out of sight, because it’s stupid.

I also have an objection that they don’t address at all, because they don’t have enough awareness of the complexity of biology to even think of it. These are people who divide the biological world into wolves and sheep, and have no knowledge of any animals other than familiar domesticated mammals, and see themselves as readily able to reduce nature to a barnyard. Here, for example, is one simplified diagram of a food web.

Which predator species do you remove? Sharks are always the bad guy, so let’s pull out that Jenga piece. Hey, porpoises are eating the same things the shark does, better get rid of them, too. Seals and sea lions? Definitely big-time carnivores.

Then there are the difficult decisions. A huge number of different species are eating market squid — do they all go, too? All the birds and fish, as well as the mammals? They have one excuse in their essay, that they’ll have an exception for the eating of animals that are arguably nonsentient, such as oysters and clams. Are squid nonsentient? Where do they draw the line? Who draws the line? Is it OK to kill and eat anchovy or salmon? They do suffer when they’re bitten in half, they bleed and struggle, so the argument for ending pain ought to apply to them, too. And what about the krill? Will no one speak for the krill?

I’m not a fan of simple-minded utilitarian arguments, but I at least expect some consistency and appreciation of the difficulties and trade-offs that we always have to make. These particular philosophers read like people who learned all their biology from the Bible, and think that qualifies them to judge the way the world ought to work. If you need lovely prose to appreciate nature, read Aldo Leopold rather than Isaiah. At least Leopold gets his facts right.

And now for an important philosophical question » « I am horrified at what goes on in philosophy departments, personally