One thing I do not miss at all about living in Salt Lake City was the bland, totally credulous way the television news would report on all things Mormon. No claim was too ridiculous if it was said by the Church of Latter-Day Saints, and all the officials of that organization were treated as revered and unquestionable sources of authority. I just had to keep the television off and shun the newspapers every year at the time of the General Conference.

So this news story gave me horrible flashbacks: smiling Mormons announcing new lunacy to the straight faces of reporters. The church is going to let the peons view the sacred Seer Stone of Joseph Smith! Stand back in awe! 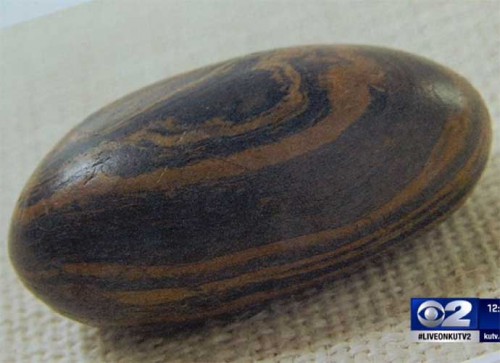 That’s the rock that Smith used to translate the invisible golden plates of Moroni into pseudo-King James English. Here’s how it worked:

I will now give you a description of the manner in which the Book of Mormon was translated. Joseph Smith would put the seer stone into a hat, and put his face in the hat, drawing it closely around his face to exclude the light; and in the darkness the spiritual light would shine. A piece of something resembling parchment would appear, and under it was the interpretation in English. Brother Joseph would read off the English to Oliver Cowdery, who was his principal scribe, and when it was written down and repeated to brother Joseph to see if it was correct, then it would disappear, and another character with the interpretation would appear. Thus the Book of Mormon was translated by the gift and power of God, and not by any power of man.

So the Mormon Church is now proud to announce the viewing of a prop used by a treasure-hunting con man in the early 19th century. I can picture the pious gasps of delight even now, and am glad I’m no longer anywhere near Utah.

Don’t worry, world, he won’t be president » « How does this get past an editor?