David Futrelle missed an opportunity! He posted about this awesomely stupid Reddit thread that asserts the biologically inferior nature of women, and then he admits to reading only a few of the comments in the resulting mess. 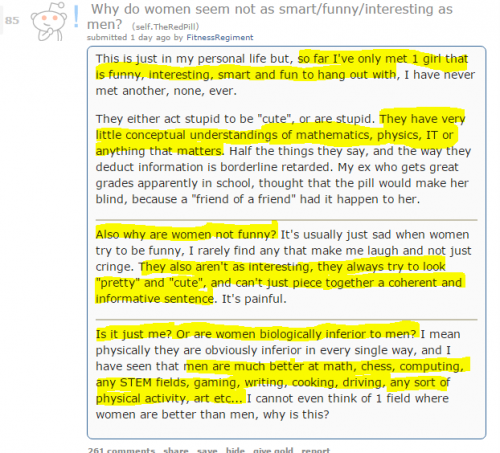 I do love that statement that They have very little conceptual understandings of mathematics, physics, IT or anything that matters — so many presumptions packed into one short sentence! — and it’s amusing that this poor boy hasn’t met any intelligent women because he defines “intelligent” as being as intellectually stunted as he is.

But there are so many other comments on that thread that expose the ignorance of the participants! Reading it as a biologist made me want to send these wankers back to Bio 101, except that I realised they probably never attended it in the first place — they were too busy doing things that matter, like getting good at vidya games.

But just look at what they are saying!

Men could be viewed as testing probes, and only the ones that work the best in any given environment get to perpetuate the tribe.

In this specific regard, humans are very much a “tournament’ specie.

Women stagnate evolutionarily because they have 2x chromosomes, the fact male is xy allows for more genetic variables, which allows for different off spring. Men tend to be smarter than women but also stupider than women because of this genetic trait. By having the variability in the man who must earn their partner it ensures the best traits move forward.

Say what? Males are homozygous for essentially all the genes on the X chromosome; that makes them more likely to express inherited defects of genes on that chromosome. That’s why more men are color blind or hemophiliac than women.

There’s a reason women are naturally soft and a man is naturally hard. Why men get erections which are hard and stick it inside a pussy which is soft. Society is going against nature and women are only doing themselves more harm than good.

True fact: men turn into women when they don’t have boner.

Pandas are biologically inferior, yet we try to keep them around. evolution makes no mistakes, and eliminates those unfit to thrive.

O Omnipotent Infallible Evolution! Where were you when my appendix nearly killed me when I was 9, and why do I need eyeglasses, and how the hell did biologically inferior pandas survive for millions of years without us to keep them around?

Perhaps the best sign of the power of evolution is that these guys’ attitudes are so repellent to women that they’re less likely to reproduce.

Men and women are very different despite what the media likes to say. A man’s brain is far more complex (16% more neurons and a 50% higher synaptic density). The intelligence distributions are very different, women are much more “average” while there are more men at the extremes (stupid and smart). At near genius levels there are 3x more men and at genius levels there are roughly 5-10x as many.

I read somewhere that 91.3% of all statistics are made up. I’ve never heard that nonsense that men’s brains are “more complex” than women’s before, but the numbers are not true. Men’s brains, on average, are somewhat larger than women’s because men are somewhat larger overall. We also find that large men, on average, have larger brains than small men, and large women have larger brains than small women.

Unfortunately for their thesis, there is no direct correlation between brain size and intelligence (there is an indirect one: poor nutrition correlates with short stature and reduced intellectual capacity).

Do I need to say again that I hate this irrational argument that the greater variance in males necessarily implies that there are more geniuses in addition to more idiots? It’s not true. It’s the Just World fallacy: if nature has encumbered men with a higher frequency of genetic problems, then it’s only fair that nature would compensate men with more superior individuals.

News flash: just as evolution actually does produce mistakes, nature is not fair. Nature does not care.

The reason there are more men in the top ranks of intellectual endeavor is not that they are inherently superior human beings (although they’d love for you to think so) but because they were given opportunities to prosper and grow that most women were not.

I suspect that if all human beings were given equal opportunities to learn, the statistical distribution would slowly shift, and when we looked at the biological properties of both sexes, we’d find that there are two bell curves of roughly similar shape and distribution, but that one is simply shifted to the left relative to the other. On charts of physical strength, for instance, the male curve would be shifted to the right relative to women’s.

Isn’t it odd, though, how no one argues that women’s average strength inferiority implies that because there are many women weaker than many men, that there ought to be more physically superior women in the top ranks? Shouldn’t a just world mean that there ought to be 3x as many ‘athletic geniuses’ who are women than men?

I would not be at all surprised if, in a hypothetical world of equal opportunity, it was discovered that women are, on average, more intelligent than men. This does not imply that every man is inferior to every woman, though, although the men on that Reddit site certainly seem to think the reverse is true.

Is it just me? Or are women biologically inferior to men?

CORRECT! They are nothing more than good for fucking and children.

I just hope that in the coming egalitarian universe we men can be judged by our relevant abilities rather than what package we carry in our crotches. Which is exactly what women would like to have right now, when men judge their abilities.

(By the way, I can invent an argument that’s even better than the MRA’s argument for male superiority for why women ought to be more intelligent. Processing speed seems to be an important component of success at IQ tests. Women have smaller, more compact brains than men, again on average, which means path lengths for neuronal circuitry will be shorter, so just as packing more, smaller transistors on a chip produces a faster, more efficient CPU, more compact brains ought to be more efficient.)

(That, also by the way, is a just-so hypothesis off the top of my head. Don’t treat it as evidence — it’s an example of rationalization in opposition to the rationalizations of MRAs.)

Just in case you were undecided about Trump… » « Mary’s Monday Metazoan: I look exactly like this when I get out of the shower