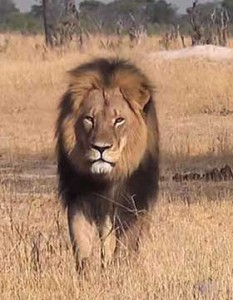 OK, everyone who has written to me to tell me about Walter Palmer, Minnesota dentist and butcher of wildlife, 5½ million people live in this state. Don’t know him, never met him, and if he were my dentist, I’d be dropping him instantly.

Walter Palmer, a trophy hunter who operates River Bluffs Dental in Bloomington, is believed to have paid about $55,000 to bribe wildlife guards July 1 at Hwange National Park, reported The Telegraph.

The Zimbabwe Conservation Task Force confirmed that Palmer — who has been previously fined for illegal hunts — spotted Cecil the lion at night and tied a dead animal to his vehicle to lure the famed cat out of the park.

That tactic is known as “baiting” and is used by big-game hunters to justify their killings as legal.

You may be happy to know his office is closed, and his web pages are overrun with indignation. The death threats should stop, though: there’s no excuse for that.

You might also be happy to know that Palmer is very, very sorry. Well, sort of.

“I hired several professional guides, and they secured all proper permits,” the statement read. “To my knowledge, everything about this trip was legal and properly handled and conducted.

“I had no idea that the lion I took was a known, local favorite, was collared and part of a study until the end of the hunt. I relied on the expertise of my local professional guides to ensure a legal hunt.”

Palmer, who has on his record a conviction for poaching a bear in Wisconsin several years ago, said he has not been contacted by any authorities in Zimbabwe or the U.S. about his killing the lion, but added he will cooperate with investigators. The public relations firm that worked with Palmer on the statement said he was in the Twin Cities on Tuesday.

“Again, I deeply regret that my pursuit of an activity I love and practice responsibly and legally resulted in the taking of this lion,” the statement concluded.

See? He’s apologizing for loving to slaughter wild animals responsibly and legally. That makes it all alright. Except…what about the illegal luring? The $50K+ bribe? We don’t usually use the word “bribe” for ethical activities. “I’m going to the grocery store to bribe the clerk for a gallon of milk!”

Oh, and there’s some icing on this cake.

Trouble also has found Palmer away from his hunting expeditions. In 2009, he and the Minnesota Board of Dentistry agreed to a settlement involving allegations that he sexually harassed a receptionist. She alleged that Palmer made comments about her breasts, buttocks and genitalia.

Without admitting guilt, Palmer settled and paid $127,500 to the woman, who also was his patient. The settlement included references to his bear-hunting conviction and “substandard record keeping.”

His behavior clearly doesn’t interfere with his dental practice, though. Just imagine having so much money that you can drop tens of thousands of dollars on an African animal slaughter spree, or hundreds of thousand dollars to be able to lasciviously comment on your colleagues’ and customers’ sexy bits. The life of a Bloomington dentist is a carefree and profligate life.

Until everyone in the world notices what you do for fun, that is.