By carrying that coconut, octopuses of this sort made a change in their legal status necessary. 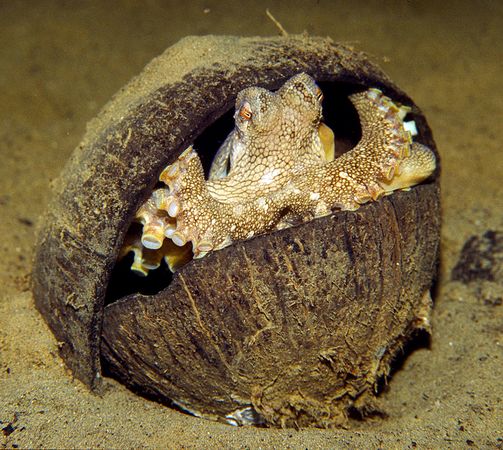 The extent of octopus intelligence is debated, at least among vertebrates, but there is evidence of pretty complex behavior, including possible tool use. See, e.g., J.K. Finn, T. Tregenza, and M.D. Norman, “Defensive tool use in a coconut-carrying octopus,” 19 Current Biology 1069 (2009). The evidence was enough to convince the UK to grant protection to the common octopus (Octopus vulgaris) in 1993, thus ironically granting it a certain elite status.

That discrimination ended in 2010, however, when the EU enacted a broader directive that let the other octopuses and even squid into the club:

They are calling it an “honorary vertebrate,” which sounds rather like a demotion to me. Can we instead declare people to be honorary cephalopods? Thank you, that would be awesome.

Säkularisierung und globale Konflikte » « Sleep is for the weak