I was just chided by Ally Fogg!

No. of days Heather Hironimus in jail for protecting her child from genital mutilation? Now 5 No. of US liberals giving a fuck? Still 0

No. of days Heather Hironimus in jail for protecting her child from genital mutilation? Now 5
No. of US liberals giving a fuck? Still 0

Hey! I’m a US liberal…and I had no idea who Heather Hironimus was. My excuse was that it was the end of the semester followed by a bout of travel and family business. But now I’ve looked her up and…hoo boy. I am shocked.

Heather Hironimus was married to Dennis Nebus. They had a child, Chase. They divorced, bitterly, it seems. They are now engaged in one of those nasty tugs-of-war over petty issues, and the center of that battle is their child. Well, not even the child: the child’s foreskin. Nebus demands that it be cut off. Hironimus refuses, and actually fled and went into hiding to protect her son.

Heather Hironimus went missing with her 4-year-old child nearly three months ago, going into hiding as her long court battle against the surgery reached its climax. Though her defenders said she was simply doing what she could to protect a child portrayed as “scared to death” of the procedure, a judge issued a scalding rebuke for her refusal to appear in court, charging her with contempt and issuing an arrest warrant.

She has now been arrested and is sitting in jail.

I’m wondering why that judge hasn’t been arrested. I’m wondering what the hell is wrong with Dennis Nebus, that it is so important to him to force his own child to go through a painful and pointless medical procedure. I can only come to one conclusion. 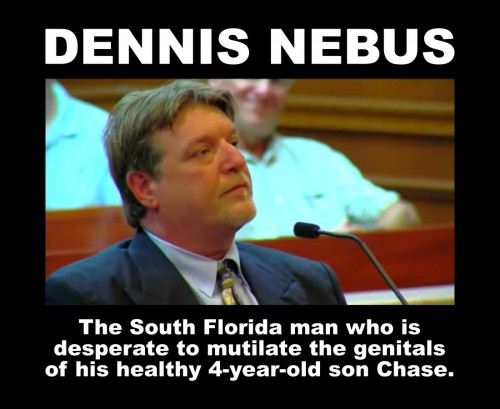 This shouldn’t even be a court case. When it’s a matter of cosmetic surgery, and there is no pressing medical need at all, the default ought to be a deferral until the patient is able to give informed consent.

What’s next? If a father insists that his daughter’s labia need a few stitches, will the courts enforce that as well?

Perpetuum mobile » « Ireland and the US share a common struggle