Ken Ham is such a disappointment. He has this regular series of short radio-style bits of apologetics, and they are dreary and boring. I had hopes for this one, about “Carnivores Before the Fall (Leopard Seals)” — I expected some juicy stories about what these big, large-fanged predators ate before the Fall. This, for example, is what a leopard seal looks like before it bites your face off. (But don’t worry, there are very few examples of them attacking people.) 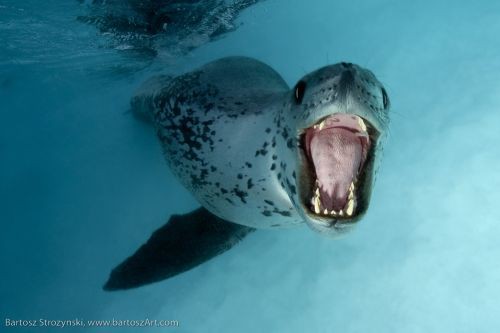 Big, hungry, sharp-toothed animals — what did they eat if all animals were vegetarians, once upon a time? Let’s ask Ken Ham!

(Note: if you start listening to this and find yourself gagging over Ham’s sing-song “I’m talking to stupid children!” voice, there’s a transcript of the relevant part down below.)

It is the second largest seal species reaching lengths of 11 and a half feet length and 840 pounds. Using their strong jaws and inch long teeth, leopard seals will kill and eat almost anything, including seals, squids, penguins, seabirds, and shellfish. Now did God originally create leopard seals to be such vicious predators? No, he didn’t! Genesis tells us that originally animals were created to be vegetarian, including leopard seals. It was because of sin that death and carnivory entered into the creation. Death was never part of God’s original design.

He punted. After describing the voracious eating habits of leopard seals, he just asserts that they were vegetarians. No explanation. No discussion of what an animal so well adapted to killing and eating meat might have gnawed on with those canines and incisors. Kelp, maybe? Plankton? Oh wait, those are small animals, can’t have that. Did they desperately scrape algae off of rocks? What?

That was a pathetic effort, Ken.