We should form a club: the Evolution Teacher’s Club. We seem to share a lot of experiences. James Krupa has written an article on teaching evolution at the University of Kentuck, and it is so familiar (except for the bit about teaching classes of 300 students — my largest class at UMM is about 50 students).

I realized early on that many instructors teach introductory biology classes incorrectly. Too often evolution is the last section to be taught, an autonomous unit at the end of the semester. I quickly came to the conclusion that, since evolution is the foundation upon which all biology rests, it should be taught at the beginning of a course, and as a recurring theme throughout the semester. My basic biology for nonmajors became evolution for nonmajors. It didn’t take long before I started to hear from a vocal minority of students who strongly objected: “I am very offended by your lectures on evolution! Those who believe in creation are not ignorant of science! You had no right to try and force evolution on us. Your job was to teach it as a theory and not as a fact that all smart people believe in!!” And: “Evolution is not a proven fact. It should not be taught as if it is. It cannot be observed in any quantitative form and, therefore, isn’t really science.”

The first course our students take in biology is titled “Fundamentals of Genetics, Evolution, and Development”. We give them a historical overview and a big-picture perspective on the major themes in biology first, and then everything else is progressively more detailed. I’m fortunate to be in a department where all of my fellow professors consider evolution to be the essential framework for biology. My colleague Chris Cole drew up this summary of our curriculum, and I have to tell you, it’s “laced with Darwinism” (actually modern evolutionary theory) from the day students enter until the day they graduate. 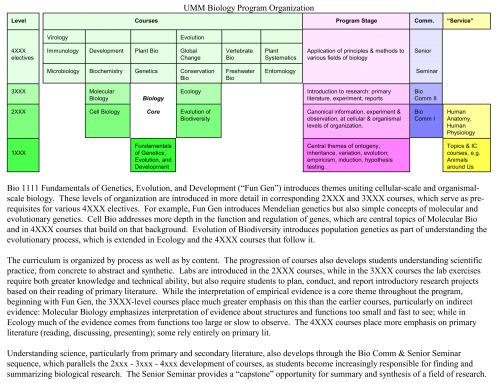 I’ve had my share of student complaints, too. Early on, a group of students collaborated on the faculty evaluation forms, and I got 6 evals that all said the same thing: “This course taught me to love Jesus even more!” I guess they thought that would sting more than a bad review. Of course, I’d never even mentioned Jesus the entire semester, I don’t promote atheism in the classroom, and the only mentions of “God” at all were in the context of pre-19th century explanations of the natural world.

I’ve had the question about monkeys asked before, but this explanation for why Catholics weren’t the first Christian faith is a new one to me.

Some students take offense very easily. During one lecture, a student asked a question I’ve heard many times: “If we evolved from monkeys, why are there still monkeys?” My response was and is always the same: We didn’t evolve from monkeys. Humans and monkeys evolved from a common ancestor. One ancestral population evolved in one direction toward modern-day monkeys, while another evolved toward humans. The explanation clicked for most students, but not all, so I tried another. I asked the students to consider this: Catholics are the oldest Christian denomination, so if Protestants evolved from Catholics, why are there still Catholics? Some students laughed, some found it a clarifying example, and others were clearly offended. Two days later, a student walked down to the lectern after class and informed me that I was wrong about Catholics. He said Baptists were the first Christians and that this is clearly explained in the Bible. His mother told him so. I asked where this was explained in the Bible. He glared at me and said, “John the Baptist, duh!” and then walked away.

I don’t agree entirely with the article, though. Krupa gives a lecture on the history of creationism — so do I! — but I think the lesson of such an understanding is the opposite of what he says.

This lecture should put students at ease knowing that religion and science need not be at odds. Of all the lectures I give, this one provokes the most discussion after class. Yet it often results in students expressing concern that I might not be saved. I never say anything about my personal religious beliefs, yet it is assumed I am an atheist. One student told me she hoped I could find God soon. Several simply let me know they will be praying for me and praying hard. One student explained that as a devout Catholic he had no choice but to reject evolution. He accused me of fabricating the pope’s statements. When I explained that he could go to the Vatican website for verification or call the Vatican to talk to a scientist, he insisted that there was no such information available from the Vatican. He then pointed his finger at me and said the only way he would believe me is if then–Pope John Paul II came to my class to confirm these quotes face-to-face. The student then stomped out, again slamming the auditorium door behind him.

Without preaching atheism, I explain how religions have changed and adapted over time, and how modern creationists would be considered strangely deluded heretics by devout 19th century Christians. Without coming right out and stating it explicitly, it’s clear that religion and science are at odds, and that what has happened over time is that religion has either abandoned claims that were countered by the scientific evidence, or built up hardened walls of resistance. While they’d like to believe that their dogmas and doctrines are unchanged precepts of Jesus himself (or perhaps John the Baptist), they clearly aren’t. The religious version of truth changes with every generation.

I don’t think I have as many good stories as Krupa, though. UMM is something of an elite school in our region, which tends to filter out the Bible college aspirants, and we’re very clear and explicit about how our curriculum at every level uses an evolutionary framework. Some of our local ministers are a bit concerned about that, too — they know that sending students to the UMM biology program means they’re actually going to run a long and rigorous gauntlet of evolutionary biology. Scares ’em.

But they shouldn’t be afraid. If my cohort of students who learned to love Jesus in my first-year course stuck to the program, I think every course thereafter would have confirmed their devotion to Jesus even more, so at the end of four years they would been so pious and saintly that they probably didn’t graduate — they just ascended directly into heaven.

It’s money vs. principles » « I am so disappointed in my score on this test