I’ve now read two novel attempts to explain the existence of junk DNA. To a lot of people, the very idea of junk DNA is offensive: whatever process built us, whether divine fiat or the razor-sharp honing of natural selection, must be powerful, omnipotent or nearly so, and incapable of tolerating any noise or sloppiness, especially not to the degree seen in the eukaryotic genome. There is no room for error in design.

There’s also a strong whiff of human exceptionalism. Look at us, we’re pretty much perfect! Or at least, movie stars and super-models are the pinnacle of creation/evolution. How can you even look at Scarlett Johansson or George Clooney and suggest that they are built of monkey bits and lizard leftovers, or that their manufacture was in any way slapdash?

So there’s an amazing fringe literature out there reaching desperately to find some excuse to justify every scrap of DNA, and especially every bit of human DNA, as purposeful. It sometimes gets weird.

Larry Moran finds an intelligent design creationist who thinks DNA has a fractal dimension. Fractal dimensions are a real thing, and can be calculated; I can’t pretend to understand the math behind them, but given that random noise can have a fractal dimension greater than 1, I can at least say it doesn’t have a necessary relationship to the amount of design information present. Rob Sheldon, on the other hand, claims that he can not only use the parameter as an indicator of how much information is present, but has evidence that humans have the greatest amount of information compression of any species in existence.

The DNA is software. The proteins are the video feed. The nucleus is the CPU. Humans have highly complex coding/decoding machinery in the nucleus. When mathematical analysis is performed on human DNA, it is found to have a fractal information dimension greater than 3 (papers available upon request)–indicating that at least 3 different codes are simultaneously present. This is a number bigger than chimpanzees, whose DNA is not so compressed, and if I recall correctly, come in around 2.5 or so in fractal dimensions. The paper did not analyze onions, but I think it is safe bet that the fractal dimension is < 2.0. What does this changing dimension mean for DNA size? Well the information in DNA is proportional to the volume of phase space, so if humans have dimension 3.0, then the volume ~ (3.2GBytes)^3 ==> 27 GBytes. This dwarfs the 15GBytes of the onion, but then I don’t know the fractal dimensionality of onions.

I know most of you were stopped cold by the bizarre opening metaphor — if you’re like me, you read those first few sentences and were completely paralyzed as you tried to reconcile what you know about biology with that strange analogy, and you were arrested in the process before going on to the greater silliness in the rest of the paragraph. Trust me, it just gets progressively worse, so if you’re still wrestling with the inappropriate comparison of DNA to software, you’re OK, you’re not missing anything.

Here’s the summary, in simple English.

Oh, but Sheldon isn’t done yet. He has more nonsense to peddle.

One paper that was published 3 years ago or so, suggested that embryonic development from ovum to embryo was driven by a clock. As the transcriptase zipped along the DNA, proteins were made successively by the cell, and the ordering and timing of the proteins were such as to drive the embryogenesis and development. In other words, the spatial location of the DNA was converted into temporal development of the organism. Then if an organism needed to prolong a stage of embryogenesis, the most direct way would involve adding more DNA. No extra machinery is needed, no added complications and regulators, just another 1GByte of DNA to transcribe and the necessary 30 minutes will be added to the development.

Alas for Sheldon’s Law of Terminal Addition, we already know it’s false. There is no simple sequential arrangement of information in the genome that corresponds to timing or spatial organization; the chromosome is not a map. We also know that the order of genes is greatly scrambled between different species — the human genome is not the mouse genome with a bunch of extra stuff tacked on.

There are exceptions, and I think Sheldon is regurgitating a badly muddled explanation of Hox gene clusters. Hox genes in many (but not all!) animal species are organized linearly in a cluster, ordered both from front to back and from early to late (here’s an explanation by some bozo in Nature Education).

This is, however, not a universal explanation for how all spatially localized proteins are ordered in the genome. It is also not correct that it’s handled by a transcriptase clock, an idea that makes no sense whatsoever. The regulation of Hox genes is really, really complicated, not just a matter of taking longer with longer sequences.

Do I also need to point out that if it’s all just a matter of timing, and that more complex species will require longer times to develop, then giraffes, elephants, zebras, and whales must be more complex than humans because they have significantly longer gestation times, and we’re just slightly more sophisticated than moose?

But before you take away the lesson that it’s just creationists who are idiots, there are also quite a few serious scientists who have equally silly ideas, and get published in serious journals. T. Ryan Gregory finds a paper that explains the function of junk DNA, published in Molecular Plant by someone named Freeling. Gregory cruelly calls it “word salad about junk DNA.” But that can’t be! It’s published! In a real journal! You’ll have to judge for yourself.

The Genome Balance Hypothesis originated from a recent study that provided a mechanism for the phenomenon of genome dominance in ancient polyploids: unique 24nt RNA coverage near genes is greater in genes on the recessive subgenome irrespective of differences in gene expression. 24nt RNAs target transposons. Transposon position effects are now hypothesized to balance the expression of networked genes and provide spring-like tension between pericentromeric heterochromatin and microtubules. The balance (coordination) of gene expression and centromere movement are under selection. Our hypothesis states that this balance can be maintained by many or few transposons about equally well. We explain known, balanced distributions of junk DNA within genomes, and between subgenomes in allopolyploids (and our hypothesis passes “the onion test” for any so-called solution to the C-value paradox). Importantly, when the allotetraploid maize chromosomes delete redundant genes, their nearby transposons are also lost; this result is explained if transposons near genes function. The Genome Balance Hypothesis is hypothetical because the position effect mechanisms implicated are not proved to apply to all junk DNA, and the continuous nature of the centromeric and gene position effects have not yet been studied as a single phenomenon.

I can usually pride myself on my ability to explain complex papers reasonably simply (or simpler, anyway), but I find myself completely stumped by that paragraph. So junk DNA, which is synonymous with transposons, acts as springs between regions of DNA and…microtubules? What? And a balanced distribution of these springs is required by selection? Why? I don’t know. I give up.

Let’s turn to the figures in the paper and see if they explain anything. 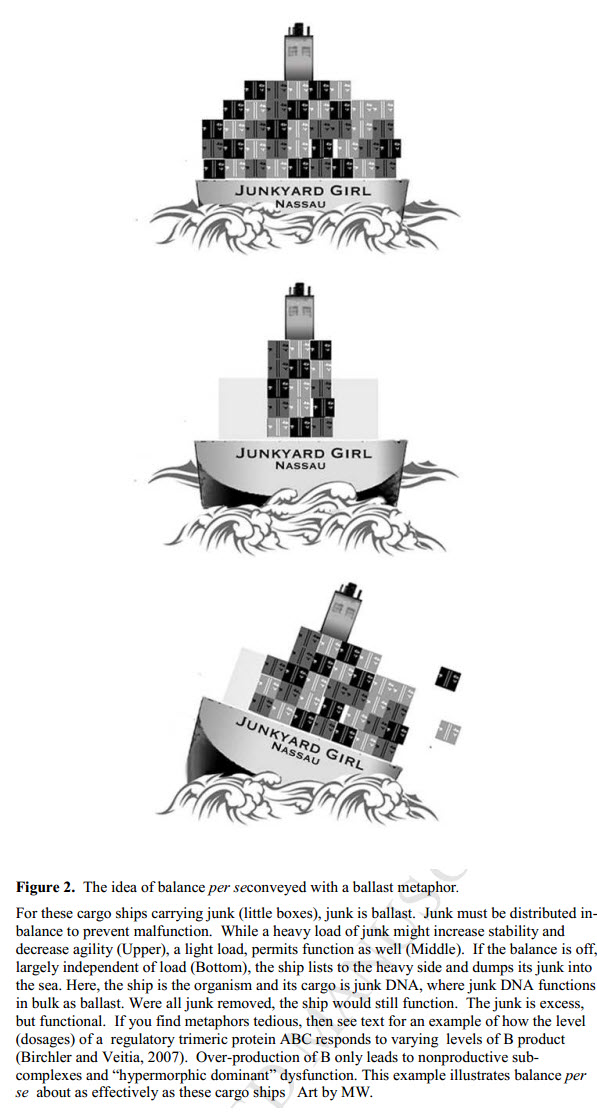 Welp, nope. Now the springs have turned into ballast on a boat, but we have no explanations for why the genome needs any amount of “ballast”. Or springs. Or what it means to have a genome capsize. Or where the boat is taking that load of ballast.

I have an idea. What if we accept the idea that humans are animals, no more exceptional in their evolution than mice, or giraffes, or moose. What if we also accept that chance plays a significant role in evolution, as does selection, and that our genomes are a contingent product of a combination of processes with no overarching design — that the operational outcome of the whole shebang is generational expediency, that all Nature expects is that we’re good enough to survive, and that if we’re a little bit better at surviving than others, our lineage will thrive at their expense.

And, the thing is, it explains a lot of phenomena that are difficult to justify with a flawless and efficient designer, and it fits all our observations of genomes and organisms remarkably well.

The only problem is psychological: you do have to kick humans off that throne you’ve put them on, and you also have to evict that invisible magical benevolent designer out of the house. It’s no loss, though, since the invisible designer never seemed to do anything, and humans work better when they aren’t lounging about on thrones.

“I would like to thank Mutti and Vatti for procreationing me” » « Awesome. Do it again.