I’ve been reading the Ferguson report. It’s a horror. Every page documents an appalling violation of the whole purpose of having a police force: these people weren’t there to serve and protect, they were there to skim off as much cream from the community as they could. This wasn’t a police department, it was a racist extortion racket, oozing corruption.

Ferguson’s law enforcement practices are shaped by the City’s focus on revenue rather than by public safety needs. This emphasis on revenue has compromised the institutional character of Ferguson’s police department, contributing to a pattern of unconstitutional policing,and has also shaped its municipal court, leading to procedures that raise due process concerns and inflict unnecessary harm on members of the Ferguson community. Further, Ferguson’s police and municipal court practices both reflect and exacerbate existing racial bias, including racial stereotypes.Ferguson’s own data establish clear racial disparities that adversely impact African Americans. The evidence shows that discriminatory intent is part of the reason for these disparities. Over time, Ferguson’s police and municipal court practices have sown deep mistrust between parts of the community and the police department, undermining law enforcement legitimacy among African Americans in particular.

At the end of the report, there are several pages of recommendations, all focused on procedural changes. After reading the document, though, while those changes are necessary, they failed to make the obvious suggestion: fire all the police officers, dismiss all municipal court personnel, burn the system to the ground, and rebuild it from the ground up. 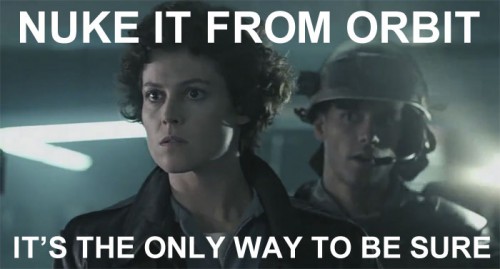 And that’s just Ferguson. Does anyone believe other communities in Missouri, or in other states, are free of the same problems plaguing that city? Demolishing the rotten police force in Ferguson would have another purpose, beyond that one town: make an example of Ferguson’s law enforcement system, then send a copy of that Justice Department report to every town in America, with the message that there are consequences to these kinds of violations.

Of course, that’s not what will happen. The outcome of that report: one employee fired.

Ferguson Mayor James Knowles says one police department employee was fired and two others are on administrative leave over racist emails uncovered in a Justice Department investigation into the city’s law enforcement practices.

I’m also seeing that everyone is focusing on the blatantly racist emails — and yes, those officers deserve to be fired. But the big issue, the thing that ought to rip the whole administration wide open, is the money trail. There were people raking in the cash on this operation, and it isn’t just the salaries of the police officers that matter. You know that one of the things that fed this corruption was policy at the state level: starve the civil service, make them scavenge their funding from the people they serve, and let the Republican leadership bask in the glory of cutting taxes.