Isn’t it nice of a Southern Baptist minister to expose his ignorance with a question? 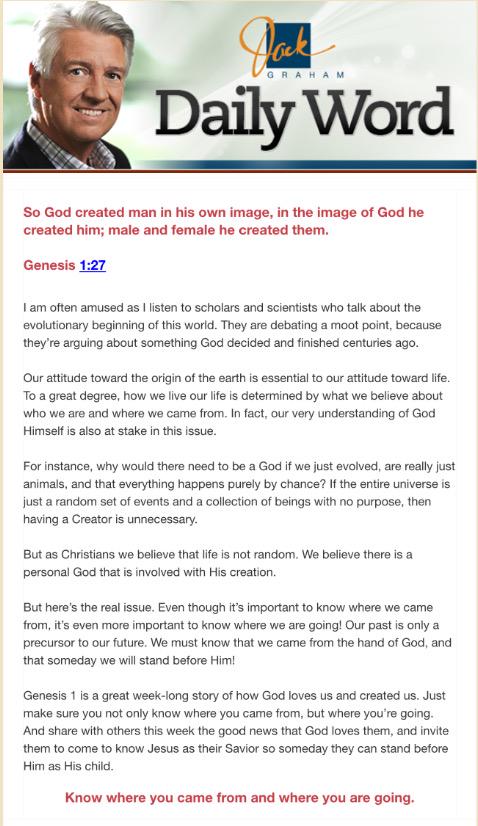 For instance, why would there need to be a God if we just evolved, are really just animals, and that everything happens purely by chance? If the entire universe is just a random set of events and a collection of beings with no purpose, then having a Creator is unnecessary.

Fact: We evolved. That we are related to every living creature on Earth is unambiguously demonstrated by the evidence.

Fact: We really are animals. We are part of a metazoan clade that’s over half a billion years old.

Fact: Everything doesn’t happen purely by chance. I seem to be breathing rhythmically right now, and there’s a rather clearly established chain of cause and effect, with rhythmic activity in the respiratory centers of the brainstem leading to autonomic activation of muscles of the ribs and diaphragm. But the chain of effect is entirely natural. Supernatural intervention is not required to make me inhale.

Fact: The entire universe is not a random set of events. It is a natural consequence of events that includes an element of chance, however, which is completely different, but still makes a damning point against Graham’s faith.

Fact: There are multiple levels of “purpose”. That we are free of the imposition of a purpose by the universe does not mean that we as individuals cannot find purpose in our lives. We are beings with no cosmic purpose.

Therefore, by Graham’s logic, a Creator is unnecessary. And I think that is a good thing.