We’re familiar with some. Smoking, for instance, irritates and damages the cells of the lung epithelium, and increases the rate of cancer incidence. UV radiation damages DNA, so prolonged exposure to the sun increases the rate of skin cancer. Chimney sweeps would get covered in the carcinogenic compounds present in soot, which would accumulate in folds of skin, and had phenomenal rates of scrotal cancer. So don’t clamber around in chimneys, stay in the dark all the time, and never start smoking, and you won’t get cancer, right? Wrong. You’ve eliminated some factors that increase the incidence of cancer, but not all. You might think that if we just eliminated every cause of genetic damage we’d be safe, except that there’s one we can’t get away from.

Cell division can cause spontaneous errors. We have all kinds of error-checking molecules that try to prevent it, but nothing in the natural world can be perfect. The error rate in human cell division is very low, about 1 mistake in every 1010 cell divisions, but it’s not zero — it means that every third division by a cell line will introduce an error. Many of your tissues are full of cells that are constantly dividing — epithelia in particular are continuously shedding old cells and dividing to produce new ones — so retiring to a dark bunker and breathing filtered air and eating only pure foods untainted by carcinogens (which don’t exist) won’t reduce your cancer risk to zero. The act of living is a cause of cancer.

But, you might be wondering, how much does simple cell division contribute to cancer, compared to environmental risks? An analysis by Tomasetti and Vogelstein tries to quantify the relative risk, and comes to the conclusion that in many cases, the largest cause of cancers is simply bad luck, caused by stochastic errors in cell division, rather than any controllable environmental factors.

They accomplished this by doing a comparative analysis of different tissues in the body, by looking at the number of stem cell divisions required to produce and maintain that tissue over the lifetime of an individual, and comparing that to the frequency of cancers in that tissue. For instance, many of the cells of the brain are in a terminal state — they don’t divide any more, so the rate of cell division is relatively low. The lining of your intestine, on the other hand, is constantly shedding cells and reconstituting itself, so you’d expect the rate of stochastic genetic damage, and cancer, to be higher in the intestine than in the brain. By examining the cancer incidence in many tissues for which the number of generating stem cell divisions are known, we can get an estimate of the relative contribution of uninduced errors in cell division to cancer.

They produced a chart showing the correlation between the total number of stem cell divisions and cancer risk — it’s totally unsurprising. Actively dividing tissues are more prone to cancer. 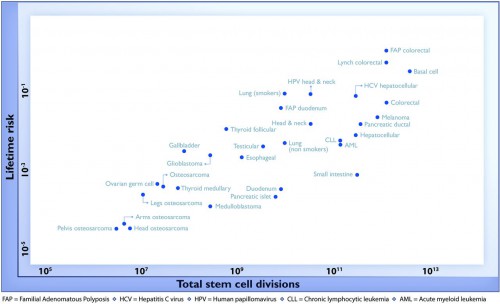 The relationship between the number of stem cell divisions in the lifetime of a given tissue and the lifetime risk of cancer in that tissue.

The results showed that stochastic errors in cell division are the single greatest cause of cancer — it’s mostly due to bad luck, not simply due to reckless exposure to carcinogens.

A linear correlation equal to 0.804 suggests that 65% (39% to 81%; 95% CI) of the differences in cancer risk among different tissues can be explained by the total number of stem cell divisions in those tissues. Thus, the stochastic effects of DNA replication appear to be the major contributor to cancer in humans.

Again, I didn’t find the idea that chance dominates in causing cancer at all surprising, although apparently some people are a little shocked.

Now hang on, though, before you take up smoking, head off to the tanning parlor, and indulge in some naked chimney cleaning, on the assumption that we’re all doomed anyway, and we’re all going to get cancer no matter what bad habits we eschew…this is all about probability. If you were going off to the casino to shoot craps, you wouldn’t sneer at something that gave you a 10% edge on the table, would you? What these results are saying is simply that if you roll the dice, there is always the possibility of coming up snake-eyes, so you don’t get to play forever without crapping out. Unlike throwing dice, though, there are ways you can shift the odds to reduce the probability of error in real life situations.

Furthermore, we know that some environmental factors can significantly increase your risk of cancer. In the graph above, for instance, not that there are two separate entries for lung cancer, one for smokers and another for non-smokers. The Y axis is on a logarithmic scale, so you should be able to see that smoking increases your lifetime lung cancer risk more than ten-fold. Some cancers are clearly the consequence of elevated risk from environmental and genetic factors.

The authors attempted to identify which kinds of cancers were most often caused by simple bad luck (where environmental factors are not likely to be to blame) and those that are the product of additional, potentially controllable factors.

We next attempted to distinguish the effects of this stochastic, replicative component from other causative factors—that is, those due to the external environment and inherited mutations. For this purpose, we defined an “extra risk score” (ERS) as the product of the lifetime risk and the total number of stem cell divisions (log10 values). Machine learning methods were employed to classify tumors based only on this score. With the number of clusters set equal to two, the tumors were classified in an unsupervised manner into one cluster with high ERS (9 tumor types) and another with low ERS (22 tumor types).

What that means, basically, is that if you use the data that suggests a certain intrinsic rate of cancer formation that is based entirely on stochastic errors of replication, cancers that show a higher rate have an extra factor causing greater risk (ERS), while cancers with a lower rate are most likely not caused by external factors. They then let a computer classify different kinds of cancers to come up with a chart that classifies cancers into R-tumors, those that are most likely caused by uncontrollable errors in replication, and D-tumors, those that have significant environmental contributors. 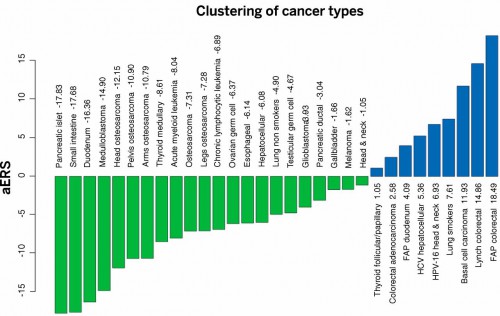 Stochastic (replicative) factors versus environmental and inherited factors: R-tumor versus D-tumor classification. The adjusted ERS (aERS) is indicated next to the name of each cancer type. R-tumors (green) have negative aERS and appear to be mainly due to stochastic effects associated with DNA replication of the tissues’ stem cells, whereas D-tumors (blue) have positive aERS. Importantly, although the aERS was calculated without any knowledge of the influence of environmental or inherited factors, tumors with high aERS proved to be precisely those known to be associated with these factors.

This is useful information. It suggests that it’s pointless to go searching for environmental causes of R-tumors — the incidence of pancreatic cancer, for example, is accounted for by the error rate in cell replication alone, and it’s unlikely that any factor in the environment makes a significant contribution in the general population (it does not mean that there is nothing that could cause pancreatic cancer, only that it can’t be a common risk factor). Meanwhile, colorectal and lung cancers do have a significant risk beyond what can be accounted for by stochastic errors, so pursuing a reduction in exposure to risk factors, like diet and smoking, can have a useful role in reducing the incidence of these cancers.

Another important caveat: this study says something about the nature of causal agents for certain kinds of cancer. It says nothing about the treatment of cancer. It says that cancer is an inevitable consequence of having populations of dividing cells, and that many cancers are probably not caused by external agents, but that does not mean, of course, that treatment is futile. It actually means that treatment is even more important — that we can never have a world where no one gets cancer, so we’d better be effective in stopping cancers once they start.

(By the way, I stole the title from Raup’s book, Extinction: Bad Genes or Bad Luck?, which says the same thing about the extinction of species. It’s often just a case of bad luck, and can’t be pinned on something specifically bad about the species or some factor in its environment. Chance is important at all levels of biology.)

Tomasetti C, Vogelstein B (2015) Cancer etiology. Variation in cancer risk among tissues can be explained by the number of stem cell divisions. Science 347(6217):78-81.

Bob O’Hara and GrrlScientist have serious reservations about the paper. I think they’re right that 65% number is rough and might easily wander as more data comes in, but I also think their objections are purely statistical and not well-grounded in the reality of the phenomenon. For example, this argument:

So where did this two-thirds ratio come from? It is the proportion of variation in the log of the cancer risk that can be explained by cell divisions. But this variation could be the same regardless of whether the baseline risk is high or low. For example, the depth of the water in the Marianas Trench goes up and down with the position of the moon, so this explains a bit of the variation in its depth. But that reveals bugger all about the absolute depth of the trench.

The first couple of sentences are exactly correct, and important for understanding the paper. They are only looking at the causes of variation in rates of different cancers. The rest is also correct in the abstract: conceivably, all of the cancer causes could be swamped in their magnitude by a great deep sea of completely unknown agents — so there could be a Mystery Factor X that is the primary cause of all cancers, which is just currently unidentified, so all Tomasetti and Vogelstein are looking at is minor causes of variations in waves on the surface.

Except…well, O’Hara and GrrlScientist even notice this little fact:

So, what proportion of cancers are due to bad luck? Unfortunately it’s difficult to tell from the paper. The figure from the paper is on the log scale, and if we extrapolate the model to zero (no cell divisions), we’d see it assumes there is no risk of cancer.

Exactly. That’s what we’d expect if the magnitude of Mystery Factor X was 0, and the baseline rate of somatic errors leading to cancer was set by the replication error rate.

I’ll also add that if they were correct, and there were a gigantic source of cancer-causing errors in all tissues regardless of their replication rate, that would only make Tomasetti and Vogelstein’s case stronger, that the controllable, environmental causes of cancer would be even smaller than the 35% suggested by their paper.

There is also some reasonable concern that the paper includes only a subset of cancers — there are some big, important ones like breast and prostate cancer that are not included. That’s because they could only include cancers in tissues for which they had data on the stem cell population and number of lifetime divisions; if you’re looking for correlations between X and Y, you can’t include data for which you only have X values.

Farewell, Avicenna » « Oh my God, the police chief said. How the hell did this happen?