Several years ago, I attended one of Kent Hovind’s seminars in St Cloud — it was genuinely the worst talk I’ve ever heard. It was over-long, it was shallow, it was a succession of lies, and it was full of really bad cornpone jokes — some of which were anti-semitic or marginally racist. It was terrible.

It seems the nut doesn’t fall far from the tree. Kent Hovind’s son, Eric, was affiliated with a pair of clowns spawned from Creation Science Evangelism, in something called The T.R.U.T.H. Group. They put out YouTube videos, including this one from several years ago. These are really bad YouTube videos. Prepare yourself for some astonishing trash.

First, the content here is worthless: they’re going on and on about the taxonomic revision of Brontosaurus to Apatosaurus, which occurred in the 1970s after more specimens had been found. This transition was not a big deal; it’s expected and unsurprising that taxa defined by partial skeletons can get renamed with the discovery of more examples, but of course creationist dumbasses think it’s somehow significant or cause for doubt.

No, what will make your jaws drop isn’t the vapid point they’re making, but how they make it. For some unfathomable reason, they chose to dress up as Professor Dhing Dhong (with coke bottle glasses, buck teeth, and a Japanese accent straight out of 1940s propaganda cartoons) and Professor Shama Lama (with skin stained orange (?), wearing a fez, and using a ludicrous Indian accent). Believe me, I couldn’t believe it myself. 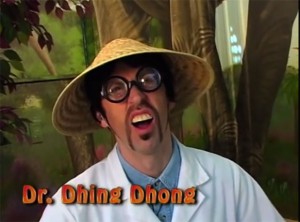 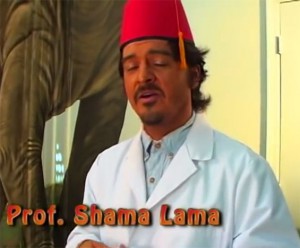 Are you charmed yet? Watch the performance.

They try to defend themselves in the comments with the same argument Ken Ham uses: creationists can’t be racist because they believe all the races are descendants of Noah.

There’s only 1 human race, my friend. No nationality is any more advanced than any other nationality. We ALL got off the same boat (Noah’s ark) together. How about you? What’s your explanation of the different nationalities. I’m curious, according to evolution, which one’s are more preferable than the others?

Evolution doesn’t argue for higher or lower, but I know one thing: the Bible claims they’re all descendants of Noah, all right, but by their vicious little myth, one race is cursed to servility.

I thought about going through some other T.R.U.T.H. Group videos to see if they were all this shamelessly bigoted, but I couldn’t bear it. One was enough.

How thin-skinned are Christians? » « I’m not seeing a difference between Hinduism and Christianity here