The godless have been praised by Rachel Maddow for being one of the few American subgroups that recognize torture for what it is, and oppose it. 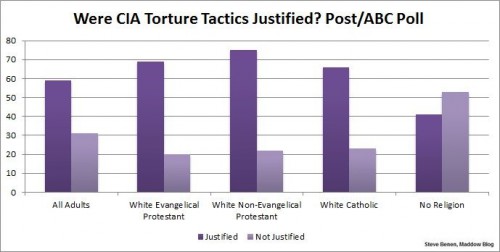 While many might assume that the faithful would be morally repulsed by torture, the reality is the opposite. When poll respondents were asked, “Do you personally think the CIA treatment of suspected terrorists amounted to torture, or not?” most Americans said the abuses did not constitute torture. But it was non-religious Americans who were easily the most convinced that the “enhanced interrogation techniques” were, in fact, torture.

The results in response to this question were even more striking: “All in all, do you think the CIA treatment of suspected terrorists was justified or unjustified?” For most Americans, the answer, even after recent revelations, was yes. For most Christians, it’s also yes. But for the non-religious, as the above chart makes clear, the torture was not justified.

In fact, looking through the poll’s crosstabs, non-religious Americans were one of the few subsets that opposed the torture techniques – and that includes breakdowns across racial, gender, age, economic, educational, and regional lines. The non-religious are effectively alone in their opposition to torture.

Well, I suspect that a more fine-grained analysis would find other groups that oppose it. I’d be surprised if Quakers were at all supportive.

I’m not exactly thrilled by the data. Atheists are a minority, so what this chart actually says is that a majority of Americans are either unaware of what was done, or they think waterboarding and ‘rectal feeding’ aren’t really torture. So that makes the overall message of the chart appalling.

And I’m not even satisfied with the atheists. 40% of atheists — let’s call them the Sam Harris atheists — think they can rationalize torturing other human beings. We either need to make deeper rifts or start proselytizing to the benighted and ignorant within our own community.

Subverting old tropes isn’t “PC” » « Rise up, white Christians of Morris, and cast off your shackles!