I guess the UK is rather racist, too…or at least that portion of the country that reads the Daily Mail. There is some idle speculation that maybe someday in some distant future some Sony executive might like to explore the idea of hiring Idris Elba to play the role of James Bond — it’s really even more tentative than that implies, because Daniel Craig is apparently under contract to do a few more — and look at how Daily Mail readers reacted to that hint of a possibility. 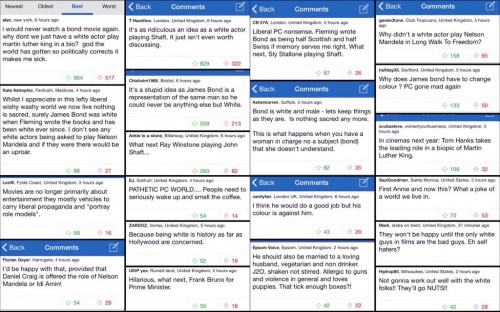 For the people who are complaining that they’d never get away with casting a white person as Martin Luther King: yeah, that’s because King was a real person, while James Bond is a fictional palimpsest for a variety of Western anxieties about the Cold War and manliness. It is right and proper that each generation’s incarnation of the spy should reflect that generation’s concerns. Daniel Craig is playing him as a weary, disillusioned warrior, and the recent entirely white Bonds are radically different from the cocky cocksman played by Sean Connery. If you’re going to complain about purity and loyalty to Ian Fleming’s vision, Skyfall was a deep betrayal.

For the people complaining that they’d never get away with casting a white person as Shaft: that’s a more interesting comparison, because Shaft is also fictional. But the appeal of Shaft was that he portrayed a member of an oppressed minority as a strong character, with a largely black cast and a black sensibility in a sea of cookie-cutter white detective stories. A Shaft with a swaggering, macho white guy in the lead? It would just be like a hundred other crime movies. It wouldn’t be Shaft without that tension of the character breaking social taboos.

For the people complaining that Fleming wrote Bond as a Scottish guy: been to Scotland? There are black people there who were born in the country and have as thick a brogue as the red-haired guy in a kilt with a bottle of Irn Bru in one hand and a caber in the other.

For the people complaining about Quvenzhané Wallis being cast as Little Orphan Annie: get over yourselves. It’s another fictional character.

For the people whining about “PC”: what would be politically correct is to define these characters by the color of their skin, just because that’s what the majority has always expected, that their entertainment should always be presented by characters who look exactly like they do. It is not PC to consider that both Quvenzhané Wallis and Idris Elba are excellent actors who would bring something fresh and interesting to roles that have otherwise grown tired with repetition.

North Korea has the internet? » « We have to do better than this