But he did, anyway. It’s THE WORLD’S MOST EYE-OPENING INTELLIGENCE TEST. 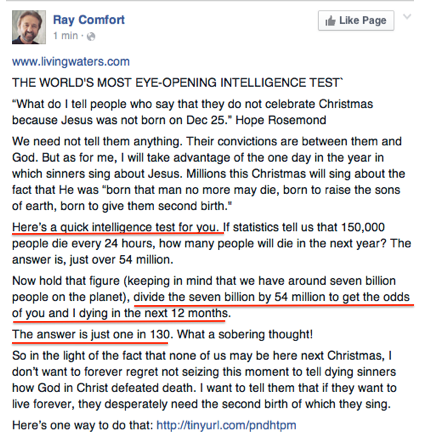 Unfortunately, he’s already failed it. His own test!

His answer is wrong for a couple of reasons. One of them is nitpicky: to get the likelihood you’re going to die in a year, using his fallacious assumptions, you’d divide 54 million by 7 billion, to get 0.0077, which is roughly 1/130.

The other is kind of flatly obvious: there is a much greater likelihood that I will die this year, than that your average 20 year old will die. Using an equal probability for all individuals is absurd. The right way to do this is to look up an actuarial life table, and when I do that, even though I’m an old geezer, my probability of dying in this coming year is 0.005185, or 1 in about 192. See? By abandoning the stupidity of Jesus and embracing statistical science, I have just greatly reduced the likelihood of dying!

But even there, the statistics are pointless. The probability that you will die at some time in the future is 1.00 — it is inevitable, and every one of us faces death. Therefore his claim that no more may die is false, and further, there is no evidence to compel us to believe that an ancient Jewish rabbi escaped death, or that believing in that religious myth will save us from our fate.