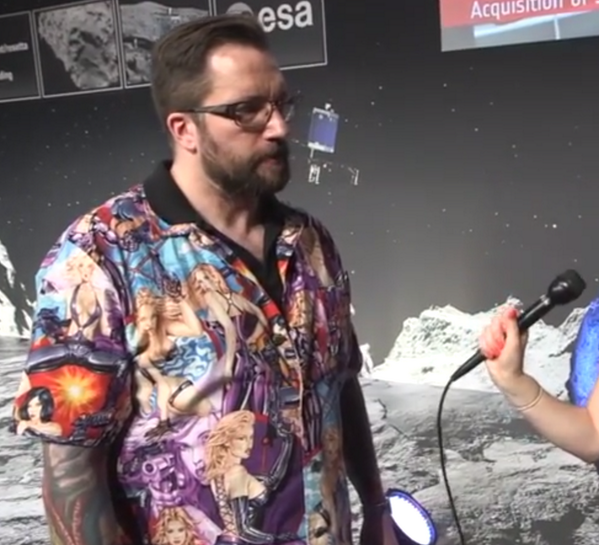 Good work, Matt Taylor, Rosetta Project Scientist at the European Space Agency, snatching the spotlight away from the technical accomplishment of your team and making it all about about your clothing choices, and for also doing it with such elan that you simultaneously denigrated all the enthusiastic young women watching the webcast. They may have been cheering at first, but then it sank in that their designated prop role is to be half-naked and posed poutingly on your shirt.

It would be nice if we could just blame Taylor’s crudity on Taylor, but it’s also depressing that no one at the ESA stopped him and said, “Jesus, Matt — we’ve got a continuous live webcast and a series of one-on-one interviews to do. You can’t go on looking like some cheesy stud who strolled out for a beer and a lad mag!”

He did change out of it later. I hope it’s because some higher-up slapped him silly and shamed him for embarrassing the organization.

It’s like getting a disillusionment enema every morning » « The Discovery Institute, professional as always