We had a brief intrusion by a few trolls over #gamergate: they were trying so hard to seem polite and rational while being obsessive and repetitive and tedious, clearly hiding their true goals under a veil of politeness. I’ve seen similar behavior from cultists, and it’s rather creepy.

Well, it turns out that that is actually a declared part of their strategy. When they aren’t trying to interface with normal people, they’re utterly nuts. Here’s an example: a document put together by some guy or group called @RogueStarGamez, to instruct people in how to talk to ordinary humans so the crazy doesn’t leak out. Sorry, too late, I’ve read your programming manual, and you people are scary freaky sick. 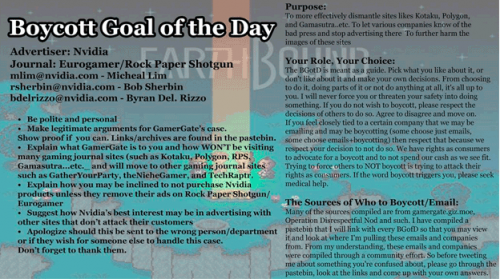 It’s a *chan psyops game, full of militaristic jargon and cartoons: they’re calling whatever they’re doing “#OperationVoxPopuli”, with other sections title “#OperationShillsOfShilliconValley”, “#OperationWolfBlitzerKrieg”, “#OperationGithubExodus”, and “#OperationDiggingDiGRA”. It’s all deeply ridiculous. These people are jokes struggling to put on a serious face to defend their precious man-boy lifestyle.

Be not crazy, Uncle Roguestar

Too late, man, too late. I hope someone at CNN sees this bullshit, and then they’ll know to dismiss the Children’s Crusade.

But recall that one of their messages was that no, they aren’t misogynists — they just care about ethical journalism. They’re lying. Here are their stated goals:

Purpose:
To more effectively dismantle sites like Kotaku, Polygon, and Gamasutra..etc. To let various companies know of the bad press and stop advertising there To further harm the images of these sites

Ethical journalism is not about silencing people who disagree with you — this is a censorship campaign, pure and simple. We can see through your mask…and boy, do you make it easy.