This image is going to be iconic. 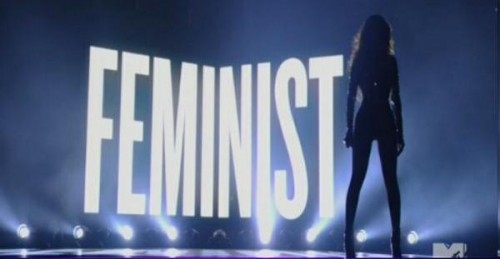 Conservatives are confused: they have this picture in their heads of feminists as dour old prudes in shapeless clothes who want to kill men (see also stupid Scot anti-feminist). This portrayal is their major marketing strategy — why would anyone want to be a feminist? You have to hate sex and hate men and hate nice clothes and hate fun in order to be a feminist!

As Amanda Marcotte explains, though, what Beyoncé has done is reclaim happiness and personality as part of feminism.

I’m grateful to Beyoncé for really putting forward, particularly with this latest album, a strong vision of female sexuality that is about demanding equality, centering female pleasure in women’s experience, and also knowing that it’s fun to dance and show off your body—more fun if you’re the one in control of the situation . Objectification is about being reduced to an object. Beyoncé is doing quite the opposite, asserting that sexiness can be part of a package of a whole human being whose sexuality is, above all other things, about claiming joy and pleasure for herself. Anyone who looks at her and sees an object has revealed far more about themselves—and their inability to ever see women as people—than about her.

You know what else I’ve noticed? While feminists can have joy and strength in their lives, MRAs come across as bitter, angry, frustrated whiners. I think their marketing strategy has backfired on them!