Susan Blackmore always lectures entertainingly — really, if you get a chance to hear her, you should — so I can guess how surprised she was when students claimed offense and walked out on her talk. They were religiously indoctrinated, and simply shut down their brains when the word “evolution” came up, and when she started presenting rational and secular explanations for the existence of religion, just forget it — there were a lot of students who thought you could only quote the Bible and Koran with unstinting reverence, accepting their divine claims at face value.

It is sad to see young people with such closed minds.

But one comment jumped out at me — it was so familiar.

Outside, some young Muslims were waiting for me. I was angrily told that I’d made them feel ignorant. They asked whether I’ve read the Koran – at least I could say that I’ve read an English translation (of the whole horrible book). I was asked whether a leech looks like an embryo. (What ???) ‘A little bit,’ I agreed, ‘and there are good biological reasons why animal shapes are … ‘There you are then, that’s why I believe the Koran is the word of God. This is true, like everything in the Koran’.

OK, first: young people are ignorant. So are old people, but hopefully less so. That religious people who claim that everyone is born sinful and evil and deserving of hell should take exception to the demonstrable fact that everyone is actually born ignorant is simply bizarre. That’s why we have schools! That’s why we supposedly have organizations like the “Oxford Royale Academy”, where she was speaking. You don’t go to school to have your uninformed biases affirmed, you go there to learn.

But that leech nonsense — oh, I have run into that. At least once a week I get email from some determined Muslim declaiming that al-alaqa means Mohammed had divine insight. That because he wrote that embryos were slimy things hanging from the uterus, he had super-human knowledge of embryology…when none of his descriptions said anything more than what was common knowledge at the time, and was actually factually incorrect in detail.

There are similiarities between leeches and people, because both evolved from ancestral segmented worms. The Koran offers no details on that at all, but simply makes a metaphorical comparison of embryos with small slimy living things, which does not require any magical power to do.

Besides making my head hurt, this video presents no evidence. It is simply repetitious riffing on the one short paragraph in the Koran that talks about embryos, at a level of disingenuous shallowness that makes it absolutely useless. It does two things: it repeats those verses from the Koran with flashy cuts and splices.

That’s it. Every two years I teach a course in development, which only touches lightly on major themes in the science — it sure would make it easier if all I had to do was talk about two sentences. But I can’t, because Islamist embryology is over-hyped nonsense.

The other thing the video does, since it has no evidence to back up its claim that the Koran is magically perceptive, is strain to make comparisons to show that human embryos are just like a leech. We must make Mohammed true by shoe-horning embryos into being exactly like leeches! It claims that the internal anatomy is similar…never mind that leeches are acraniate, have a ventral nerve cord rather than a dorsal one, and that they are comparing adult leeches to embryonic humans. And then there’s this bit, startling in how ludicrous it is. 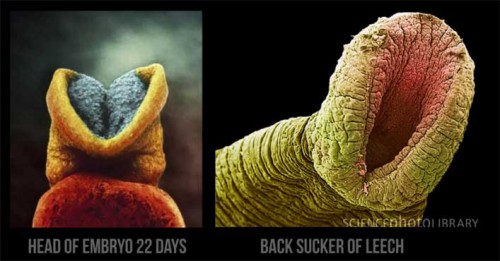 That’s right. They are explicitly claiming that the developing human brain is exactly like the muscular sucker at the ass end of an adult leech. It’s “mind-blowing”, they say.

Anyone who falls for this bullshit has a blown mind, that’s for sure. I wouldn’t be surprised if they had a bloated worm sphincter for a brain, either.

Why cops have a bad reputation » « Congratulations to Dr Avicenna