I think the engineers are just trying to wind me up, again. Joe Felsenstein tackles a paper published in an applied physics journal that redefines evolution and tries to claim that changes in aircraft design are a good model for evolution. It’s a terrible premise, but also, the execution is awful.

But permit me a curmudgeonly point: This paper would have been rejected in any evolutionary biology journal. Most of its central citations to biological allometry are to 1980s papers on allometry that failed to take the the phylogeny of the organisms into account. The points plotted in those old papers are thus not independently sampled, a requirement of the statistics used. (More precisely, their error residuals are correlated). Furthermore, cultural artifacts such as airplanes do not necessarily have a phylogeny, as they can borrow features from each other in massive “horizontal meme transfer”. In either case, phylogeny or genealogical network, statistical analysis requires us to understand whether the points plotted are independent.

The paper has impressive graphs that seem to show trends. But looking more closely we notice that neither axis is actually time. If I interpreted the graphs as trends, I would conclude that birds are getting bigger and bigger, and that nobody is introducing new models of small airplanes.

And they really do redefine evolution.

Evolution means a flow organization (design) that changes over time.

I’m going to redefine bridge construction as gluing together lots of matchsticks. Hire me, everyone, to help fix your infrastructure problems! I can probably underbid everyone!

But it’s just kind of amazing that they’ve defined evolution without any mention of populations or shifting allele frequencies or any of the processes (which don’t include design) that lead to changes in genotype, or even a recognition of how these processes derive from a core unity and lead to diversity. Design done did it.

My big gripe is that they got this paper published that is all about allometry with scarcely any understanding of the concept. Here’s the abstract of The evolution of airplanes.

The prevailing view is that we cannot witness biological evolution because it occurred on a time scale immensely greater than our lifetime. Here, we show that we can witness evolution in our lifetime by watching the evolution of the flying human-and-machine species: the airplane. We document this evolution, and we also predict it based on a physics principle: the constructal law. We show that the airplanes must obey theoretical allometric rules that unite them with the birds and other animals. For example, the larger airplanes are faster, more efficient as vehicles, and have greater range. The engine mass is proportional to the body size: this scaling is analogous to animal design, where the mass of the motive organs (muscle, heart, lung) is proportional to the body size. Large or small, airplanes exhibit a proportionality between wing span and fuselage length, and between fuel load and body size. The animal-design counterparts of these features are evident. The view that emerges is that the evolution phenomenon is broader than biological evolution. The evolution of technology, river basins, and animal design is one phenomenon, and it belongs in physics.

Isn’t it cute how they claim biology as a small subset of physics? Blech.

But they only address a very narrow part of allometry. There is a functional constraint on form: you won’t survive if you have a human-sized body and a mouse-sized heart; if you scale the diameter of your legs linearly with your height, you won’t be able to walk; for a given metabolic rate and mass, you need a certain amount of respiratory surface area. That’s interesting stuff to a physiologist, but it’s also purely defined by necessity.

A developmental biologist might be more interested in how the relative sizes of different body parts change over time. Again, relative growth rates of different parts of your body are not linearly related; imagine being six feet tall with the same proportions as a baby. There are regulatory constraints on development that impose different rates in different areas.

But these guys are talking about evolution and allometry…and they treat it as a simple function of physics, where you need an engine of size X to propel a plane of size Y. Then how come every animal of the same size don’t look identical? Why doesn’t every passenger plane that carries a certain number of customers look the same (well, they do kind of blur together for me, but I’m sure any aerospace aficionado can tell me about all the differences between Boeing and Airbus. But many of these differences in animals are a result of inherited patterns, and phylogeny is essential to understand them.

For example, here’s a plot of brain mass relative to body mass (yeah, ugh, “lower” and “higher” vertebrates; let’s call them anamniotes and amniotes instead). 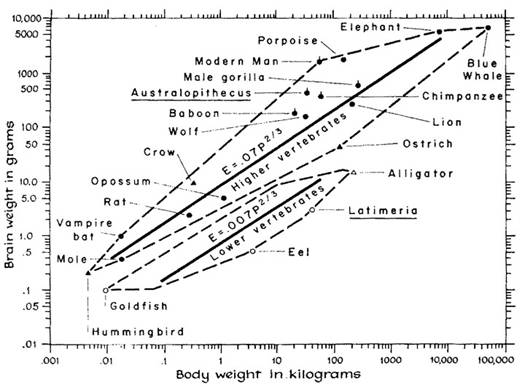 Notice that there are two lines drawn. Both show an upward trend, with a slope that’s proportional to the 2/3 power of the body size (that N2/3 shows up a lot in allometric growth plots). But given a fish (an anamniote, or “lower” vertebrate) and a mammal (an amniote, or “higher”) of exactly the same body mass, the mammal will have a relatively and absolutely much larger brain.

Explain that, engineer, with nothing but algebra and no concern about phylogenetic relationships. It takes more to understand evolution than physics alone, and you have to take into account history, environment, inherited properties, selection, and chance as important parameters.

Oh, well, I’ve learned that physics must be really simple. I can design a plane from the ground up if I simply postulate a spherical 747. Ha ha, all those fools getting engineering degrees when they could just bring in a clever biologist to solve all their trivial little problems.

Botanical Wednesday: Cruel bird » « Well, I am on a diet and trying to lose weight