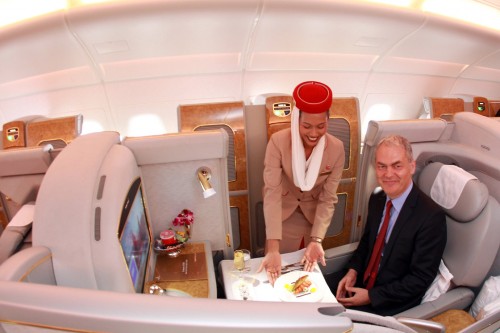 You will enjoy superb food and drink and be cosseted in a private compartment with a sliding door, a lie-flat seat with mattress, a vanity, a personal minibar and flat-screen television set, and a luxury bathroom down the aisle where you can take a shower.

The cost of this one round trip flight in first class? $32,840. That’s more than half my yearly salary. And some of you are sitting there thinking Myers is awfully privileged, because it’s more than your entire yearly income. You’re right, I don’t deny it.

I don’t blame the airline, it’s a symptom of a system that is so screwed up that some people are granted such astronomical wealth that they think nothing of spending so much on a single luxurious outing while others scrabble at two jobs to try and make enough to simply live.