Mississippi has a law that allows stores to discriminate against gay customers, so some of the more enlightened businesses that would rather sell their stuff to anyone willing to pay for it are putting up stickers in their windows to let everyone know that they have no objection to gay people. 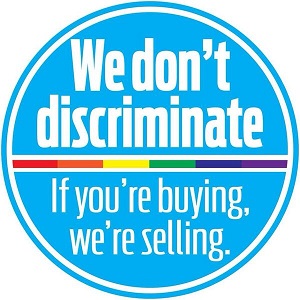 Except…the American Patriarchy Association has announced that those stickers are bullying.

AFA spokesman Buddy Smith said: “If you do that, you are agreeing with these businesses that Christians no longer have the freedom to live out the dictates of their Christian faith and conscience.

“It’s not really a buying campaign, but it’s a bully campaign, and it’s being carried out by radical homosexual activists who intend to trample the freedom of Christians to live according to the dictates of scripture.

“They don’t want to hear that homosexuality is sinful behaviour – and they wish to silence Christians and the church who dare to believe this truth.

I don’t even…so personally following your own moral dictates that say you should not oppress others for their sexual preferences tramples the freedom of Christians? OK. Then I shall trample Christian morality wherever I go.

That human need to control their perceived inferiors » « Checkmate, evolutionists!