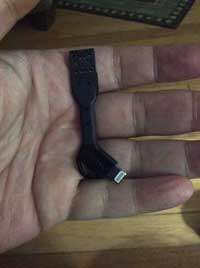 I really do like Apple products, but there’s one thing about them that really annoys me: the ever-shifting arrangement of connectors. Every Mac device seems to have a slightly different array of ports, and you need different cables with every one. I’ve got four different video adapters in my travel bag. On my last trip, I brought the charging cable for my iPad…which doesn’t work with my iPhone, so my phone was dead on the second day. I can’t even use the power brick from my wife’s laptop on mine, and vice versa. So I’m always on the lookout for relatively cheap, non-Apple adapters of various sorts.

I like this one, from Nomad. It fits on my keychain! It’s tiny! I’ll have a connector for my iPad everywhere I go! Also, they sent it to me free on trial, so even better.

Of course, now watch: the next time I get a new laptop, it’ll have even more different cables. What I’m going to need is the Swiss Army Knife of cable adapters.

The F-Word Conference » « The scary part is…