Today’s Doonesbury has a couple of characters reminiscing about being in the Iraq war in 2004…and they quote George W. Bush. 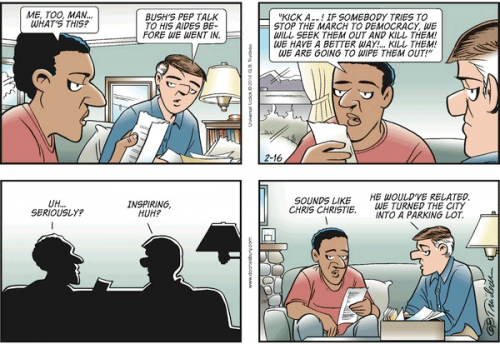 Is that real? I’ve been working hard to erase the Bush years from my memory, but did we really have a president that simple-minded in office just 5 years ago?

“Kick ass!” he quotes the president as saying. “If somebody tries to stop the march to democracy, we will seek them out and kill them! We must be tougher than hell! This Vietnam stuff, this is not even close. It is a mind-set. We can’t send that message. It’s an excuse to prepare us for withdrawal.”

“There is a series of moments and this is one of them. Our will is being tested, but we are resolute. We have a better way. Stay strong! Stay the course! Kill them! Be confident! Prevail! We are going to wipe them out! We are not blinking!”

‘We are better! Kill them! Demoooocraaaaacyyyyy!’

I am so disappointed in Obama. But it helps to remember the idiot in office before him.

Apparently, atheism has been disproven » « I’m back from the Creation Science Fair!