Obama mentioned that women make 77 cents on the dollar compared to men. You know what that means? Cue the jerks making bogus statistical arguments to make the gap go away — in this case, wouldn’t you know it, Christina Hoff Sommers.

What is wrong and embarrassing is the President of the United States reciting a massively discredited factoid. The 23-cent gender pay gap is simply the difference between the average earnings of all men and women working full-time. It does not account for differences in occupations, positions, education, job tenure, or hours worked per week. When all these relevant factors are taken into consideration, the wage gap narrows to about five cents.

“When all these relevant factors are taken into consideration” is code for “I’m going to make excuses to justify the difference” — it’s not that the average woman is going to find herself 23% richer when Sommers is done, it’s just that she’s going to unthinkingly apply some fudge factors to the numbers to tell us that a yearly income of $23,000 is actually the same as $30,000. And of course there are people who will seriously believe that.

But she gives the game away in that paragraph. The 23 cent gender gap is actually real, because it’s an overall measure of the average man’s and woman’s earnings — Obama wasn’t wrong at all, he just wasn’t respecting anti-feminists’ dishonest manipulation of the data. When we appreciate that total earnings are a result of multiple factors, if we catalog all those factors and then dismiss all the ones that show discriminatory patterns of reward in society, then we can explain the difference as fair and natural.

So what factors does she list as contributing to women’s lower income?

There is a point to working out all the contributing factors to average income: it’s to identify where the inequities are being generated, so that we can correct them and reward people fairly for their work. Not to Christina Hoff Sommers, though:

Much of the wage gap can be explained away by simply taking account of college majors.

That says so much. She’s looking for ways to explain away the differences. She’s not looking for answers, or ways to more fairly treat human beings, or any understanding of the very real economic differences between men and women. Here’s a shorter Christina Hoff Sommers: women get paid less because their work is less valuable.

And she isn’t even aware of how profoundly sexist her entire rationalization is.

What if we lived in a world where equal education and training and investment in preparing for a job led to jobs where the pay was equal? A social worker with a masters degree and ten years of experience should be getting roughly the same pay as an engineer with a masters degree and ten years experience, in a just world. We should appreciate that we need functional communities about as much as we need bridges and pipelines.

Grr. Every time I read anything by Sommers, I come away appalled at how superficial and self-serving her analyses are. She’s a true champion of the status quo.

Actually, I’m always appalled at any position taken by the anti-feminists — they rarely think in any way beyond justifying their prior views. This comic catches that attitude perfectly. 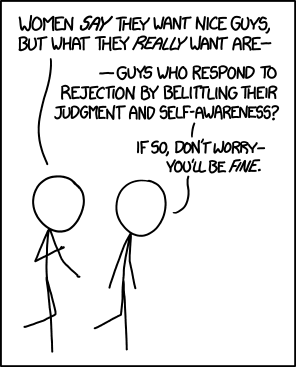