When last we heard from Rhawn Joseph, he was playing with photoshop and trying to sell off his online journal, the Journal of Cosmology. The Journal of Cosmology has been plugging away, claiming to have found bacteria in meteorites and then diatoms in meteorites — give them a blurry, vague photo of some shapeless blob, and they’ll claim it looks just like something biological on Earth. Either that, or they’ll photoshop my head on to it.

Rhawn Joseph’s latest struggle: he’s suing NASA for suppressing evidence of life on Mars. His evidence is this pair of photos taken by the Mars Opportunity rover, 12 days apart, and released by NASA. 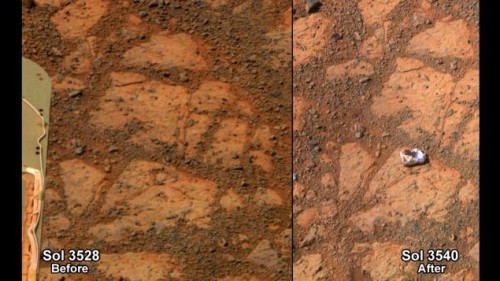 Look! There’s a rock in the later picture that wasn’t there earlier! How did it get there? NASA’s explanations were first, speculation that it could be a meteorite, but now they seem to think that it was most likely flicked by the rover itself, as it was making a turn. That sounds reasonable to me.

But not to Rhawn Joseph! We’re missing the most obvious “fact” of all, that what appeared in the later photo was no rock at all, but a mushroom. He demands that NASA investigate thoroughly, using the power of a legal writ.

In Re RHAWN JOSEPH’S PETITION FOR A WRIT OF MANDAMUS COMPELLING NASA TO PERFORM A DUTY TO THOROUGHLY SCIENTIFICALLY EXAMINE AND INVESTIGATE A PUTATIVE BIOLOGICAL ORGANISM ON MARS IDENTIFIED/DISCOVERED BY PETITIONER AND REFERRED TO BY NASA AS: “UNLIKE ANYTHING WE HAVE SEEN BEFORE.”

How can you doubt it? He has since published his results in a “scientific journal” — his own online website — complete with side-by-side photos of the Martian Funny-Looking-Rock and earthly apothecia.

The “mysterious” bowl-like structure which appeared on Mars does not resemble a rock or a meteor, but a lichen fungus which on Earth is known as “Apothecia.” A magnification of the structure Sol 3540 reveals the presence of numerous “paraphyses” which are spore producing organs of Apothecium. On Earth Apothecia are commonly observed on rocks, tree limbs, or growing on the ground next to open road. Related species are known by a variety of names, such as Eastern Speckled Shield Lichen (Punctellia Bolliana). The term “shield lichen” is applied to a variety of foliose lichens. An important characteristic is their bowl-shaped growth with brown inner surfaces. These bowl shaped structures are “apothecia” and appear basically identical to the “mystery” structure depicted in Sol 3540 but which NASA wishes the public to believe is a rock or meteor which suddenly sprouted on this slab of Martian real estate.

In case you missed the similarity, here’s a photo of the Mars FLR with big red arrows and bold text pointing to the “paraphyses” — you know, just in case the visual similarity might not be as strong as Joseph claims. 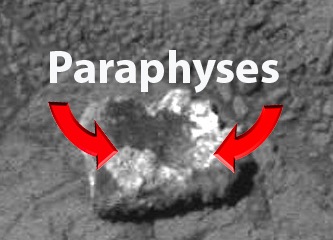 Joseph says that if you “magnify” the image the similarities to the paraphyses of apothecia are even more apparent, which is kind of amusing: you can’t magnify the raw pixel data. All the information you get is right there. You can make it larger, but that’s not at all the same as increasing resolution.

I have used all the powers bestowed upon me with my Ph.D. to squint even harder than Rhawn Joseph at that rock, and I’m sorry, it’s a rock. It’s not a fungus or a lichen or a Happy Meal toy or Rhawn Joseph’s lost marbles, and if you look at the raw image rather than one that Joseph has pseudocolored to tint it green, it doesn’t look particularly biological.

Mr Squyres said scientists believe the rock, named "Pinnacle Island," got there when the aging rover did a pirouette turn in the dusty Martian soil and knocked loose a chunk of bedrock that rolled a short distance downhill.

"We think that in the process of that wheel moving across the ground, we kind of flicked it, kind of tiddly winked it out of the ground and it moved to the location where we see it," Mr Squyres said.

Still, scientists have not found the divet the rock would have left behind. They think it is hidden beneath one of the rover’s solar arrays.

The Opportunity team plans to manuever the robotic vehicle around a bit more to see if they can find the spot from which the rock emerged.

As to why it is such an unusual color [it’s a darker red than the surface], Mr Squyres said it may be that humans are witnessing a surface that has not been exposed in a very, very long time.

"It appears that it may have flipped itself upside down," he said.

"If that is the case, what we are seeing is we are seeing the surface, the underside of a rock, that hasn’t seen the Martian atmosphere for perhaps billions of years."

Already, an analysis of the rock with the Opportunity’s spectrometer has shown a "strange composition, different from anything we have seen before," he told reporters.

The rock has a lot of sulphur, along with very high concentrations of manganese and magnesium.

"We are still working this out. We are making measurements right now. This is an ongoing story of discovery," he said.

Ah, but I think you see the real problem: NASA has used data from other instruments on the rover to come to a conclusion that differs from Rhawn Joseph’s far-fetched speculation of Martian mushrooms.

Speaking at the Twin Cities campus of the University of Minnesota » « Botanical Wednesday: Cold days