What if the National Association of Science Writers convened a panel on sexual harassment and discrimination, and no one cared? This report on sexual harassment and science writing at NASW is strangely, delicately neglectful, from the beginning where it irrelevantly claims that the Bora Zivkovic story no longer dominates science blogs (So has sexual harassment vanished? Or should we be asking where it will rise up again?), to the bizarrely abrupt segue in which they “Return You to Our Regularly Scheduled Program”, which is all about calculating the number of habitable worlds in the galaxy and more self-promoting fluff from SETI. Apparently, the concerns of women in science is of dwindling concern and a distraction from the Important Subjects of Speculative Astronomy.

The middle is equally weird. It has two sections: Hearing from Women, a two paragraph summary of what the women on the panel said, followed by Hearing from Men, with four paragraphs dedicated to the reactions (admittedly sympathetic) of the men in the audience, which are described as “some of the most powerful and significant statements”. At least the women’s section closed with an ironic comment: “The medical profession is now also heavily female, she [Ginger Campbell] said, but there, too, invisibility is everywhere.” How true that is.

I would like to have read more about “Hearing from Women”, but not only could the writer not be troubled to include more of the women’s statements, but she didn’t even bother to link to any of the panelists. I can correct that, at least: Christie Aschwanden, Deborah Blum, Florence Williams, Kate Prengaman, Kathleen Raven, Maryn McKenna, and Emily Willingham. Isn’t that odd that an article purportedly about this panel didn’t even link to the panelists’ professional pages, neglected to even name one of them, yet still made that special effort to capture men’s opinions on it?

You should read Emily Willingham’s assessment of the article. It’s not at all flattering.

Start looking for the invisible women, and it’s amazing how often you can find these curious omissions. Here, for instance, is a student at Michigan State plugging the virtues of social media for advancing your career in science (and I agree with him!), but he’s especially promoting reddit as a tool…which is problematic if you’re a woman, or have a reputation as a feminist. He touts reddit as the “best bang for the buck” for “thousands of young men and women” and obliviously shows this graph of internet readers who use reddit, titled “Young males are especially likely to use reddit.” 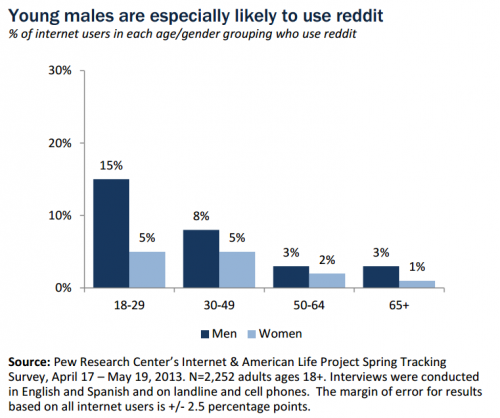 Apparently we can just ignore the pale blue bars that show that women represent somewhere less than a third of the audience you’ll reach on reddit. We’re not even going to notice the discrepancy, even if it leaps out at you as the most significant factor illustrated by the chart, and even if the title itself calls attention to it. The sexism problem on reddit isn’t even worth mentioning in an article about promoting science.

But that’s the big question that ought to be asked. Why isn’t it? Because invisible people aren’t as important.

Finally, here’s something that’s at least stirring and loud. It’s from a television show (as we all know, fictitious politicians are far more honest and bold than the real ones) in which a woman points out all the subtle signifiers the media and other politicians use to put her in her place.

Are you saying that Governor Reston is sexist?

Yes. I am. And it’s not just Governor Reston speaking in code about gender. It’s everyone, yourself included. The only reason we’re doing this interview in my house is because you requested it. This was your idea. And yet here you are, thanking me for inviting me into my “lovely home.” That’s what you say to the neighbor lady who baked you chocolate chip cookies. This pitcher of iced tea isn’t even mine. It’s what your producers set here. Why? Same reason you called me a “real live Cinderella story.” It reminds people that I’m a woman without using the word.

For you it’s an angle, and I get that, and I’m sure you think it’s innocuous, but guess what? It’s not. Don’t interrupt me when I’m speaking. You’re promoting stereotypes, James. You’re advancing this idea that women are weaker than men. You’re playing right into the hands of Reston and into the hands of every other imbecile who thinks a woman isn’t fit to be commander-in-chief.

Don’t you ever forget, ladies, that the most important parameter of your existence is how well you fit your stereotyped role. But don’t worry, no one will ever let you forget it.