You know I was really pissed off at the crap ENCODE was promoting, that the genome was at least 80% functional and that there was no such thing as junk DNA. And there have been a number of better qualified scientists (like W. Ford Doolittle and Dan Graur and many others) who have stood up and registered their vehement disagreement with that nonsense. But there are some who agree that the genome must be largely functional, like John Mattick. Larry Moran reminds me that Mattick is the author of this infamous chart, however, which is best known as the original Dog’s Ass Plot. 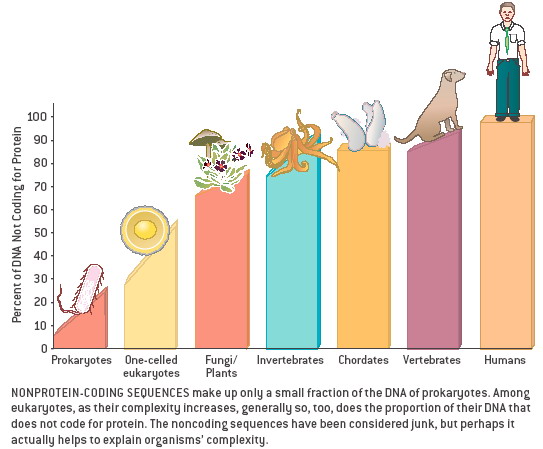 That is so misleadingly dishonest it takes my breath away — Mattick cherry-picked genome sizes to fit his curve. One of my cell biology labs involves teaching students how to properly construct a simple graph, and I think I’m going to include this figure as a bad example.

Well, Mattick has done it again. He has published a paper (how do these things get through peer review?) disputing the existence of large quantities of non-functional DNA, which is largely an attempted rebuttal of Graur’s paper. It’s a short paper, but painful in its contortions and extraordinarily poor arguments. Larry Moran has done an excellent job of tearing it apart — I think he needs to polish it up and get that published.

The worst part of the paper, though, is the concluding paragraph — you know, where most of us try to put the most important message of the work.

There may also be another factor motivating the Graur et al. and related articles (van Bakel et al. 2010; Scanlan 2012), which is suggested by the sources and selection of quotations used at the beginning of the article, as well as in the use of the phrase “evolution-free gospel” in its title (Graur et al. 2013): the argument of a largely non-functional genome is invoked by some evolutionary theorists in the debate against the proposition of intelligent design of life on earth, particularly with respect to the origin of humanity. In essence, the argument posits that the presence of non-protein-coding or so-called ‘junk DNA’ that comprises >90% of the human genome is evidence for the accumulation of evolutionary debris by blind Darwinian evolution, and argues against intelligent design, as an intelligent designer would presumably not fill the human genetic instruction set with meaningless information (Dawkins 1986; Collins 2006). This argument is threatened in the face of growing functional indices of noncoding regions of the genome, with the latter reciprocally used in support of the notion of intelligent design and to challenge the conception that natural selection accounts for the existence of complex organisms (Behe 2003; Wells 2011).

I’m sure the Discovery Institute staff are dancing in pirouettes of joy at getting a neutral or possibly favorable mention in a legitimate journal. It’s not clear exactly what Mattick is trying to do here (lack of clarity is also a sin in science writing, let me remind you): either he’s trying to pre-emptively slander his critics by impugning them with an ideological motive, or he’s granting credence to Intelligent Design creationism. I’m inclined to think it’s both; he’s clearly trying to argue with the motives of Graur and others, but also, he’s claiming, as the creationists do, that evidence of function for the highly variable component of our genome is a de facto argument for a purpose for that variation, and that evolutionary theory does not support the idea of a functional purpose for variation in the sequence of most satellite DNA, for instance.

But I would not argue that ubiquitious functionality is unlikely because it has consequences for our theories; it’s wrong because of all the evidence that has been marshaled that most DNA is not there to serve a specific, selectable purpose for us humans.

Are you going to Utah in the spring? » « Trying to overcome my Male Pattern Blindness