This ought to be on Skepchick’s Bad Chart Thursday. The Daily Mail — hey, why are you already groaning? — put up a graph to prove that global warming forecasts are WRONG. They say:

The graph on this page blows apart the ‘scientific basis’ for Britain reshaping its entire economy and spending billions in taxes and subsidies in order to cut emissions of greenhouse gases. These moves have already added £100 a year to household energy bills.

The estimates – given with 75 per cent and 95 per cent certainty – suggest only a five per cent chance of the real temperature falling outside both bands.

But when the latest official global temperature figures from the Met Office are placed over the predictions, they show how wrong the estimates have been, to the point of falling out of the ‘95 per cent’ band completely.

Now here’s the graph. Let’s see if you can detect where they mangled the interpretation. 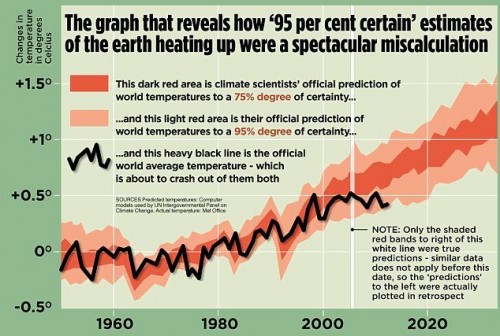 (Note: I haven’t looked to see whether the underlying data is correctly presented. I’m only examining the Mail’s ability to read their own chart.)

One error of interpretation is the claim that the ‘predictions’ were plotted in retrospect…as if the scientists had just made up the data. That’s not true — what they did was enter the same kinds of measurements available in the past as we have now, plug them into the computer as inputs, and let it generate predictions. This is an important part of testing the validity of the model — if it gave a poor fit to past data, we’d know not to trust it. That it worked well when giving the past 50 years worth of data is a positive result.

The big error of interpretation is to look at that graph and claim it demonstrates a “spectacular miscalculation.” To the contrary, it shows that the predictions so far have been right. As Lance Parkin says,

It’s an argument presented entirely in their own terms, using only data they presented, framed in language of their choosing. It’s been spun and distorted and shaped as much as they possibly can to get the result they want to get and it still says that the scientists who have consistently and accurately predicted that the world is warming were right. That’s their best shot? It’s rubbish.

Need a cleanser after seeing that? Here are ten charts interpreted correctly and demonstrating the reality of climate change.

People actually read the Daily Mail in the UK, huh? I guess it’s like the US’s Fox News…unaccountably popular.