So Ken Ham visited Sea World in Australia — he didn’t like it, it was too expensive and full of evilution, so he thinks you should save money and go to his el cheapo animatronic Sunday School in a box, instead — but I did learn something new from his complaint. I knew that “millions of years” was a phrase to make a young earth creationist’s bowels palpitate, but it turns out there are three wicked phrases to assault Christians with.

As Christians, we need to have a mental security system where an alarm goes off when aspects of this anti-God religion are presented. Here’s what should happen when you hear or read the following:

Umm, yes — birds are derived descendants of dinosaurs. Here Hammy boy, just to make you apoplectic: Microraptor. We’ve got some very good fossils of dinosaurs with feathers — and reality once again makes a creationist’s head buzz. 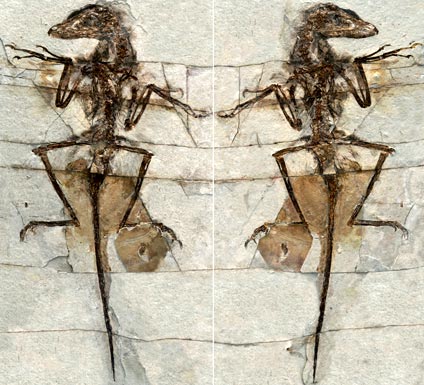 Hey, if I go up to a bible-believing Christian and say, “Feathered dinosaurs evolved over millions of years”, will the klaxons going off in their head make their brains explode, or just give them a mild headache? Either seems worth doing.

If ever I visit Russia… » « George Takei finally gets one wrong