Earlier, when I was writing up that criticism of Rybicki and Stangroom, I read through that article on shopping and foraging and evolution that he had cited in defense of his views. There was something in it that drove me to distraction and made me want to find a match and light the whole paper on fire (a bit of indulgent exorcism of annoying work that is getting increasingly difficult to do; I was reading it on my iPad). It’s something that afflicts almost all of the evo-psych work on the evolution of sex differences, and it rankles. So let me try to purge my irritation in a way other than incinerating an expensive bit of electronics. Let me instead pretend to be an evolutionary psychologist.

First, let me stipulate that everything is a product of selection; that the only interesting features in human evolution are adaptive ones. This one really, really hurts, because I’m by no means a panadaptationist, and think a lot of features are far easier to explain as a product of pure chance rather than having to come up with an elaborate just-so story to rationalize them. But have no fear, I’ll return to a pluralist view at the end.

Second, the paper included this nice chart on the differences in roles in hunter-gatherer societies (it’s relevance to a paper on shopping preferences in 19 year old American college students is still in question). 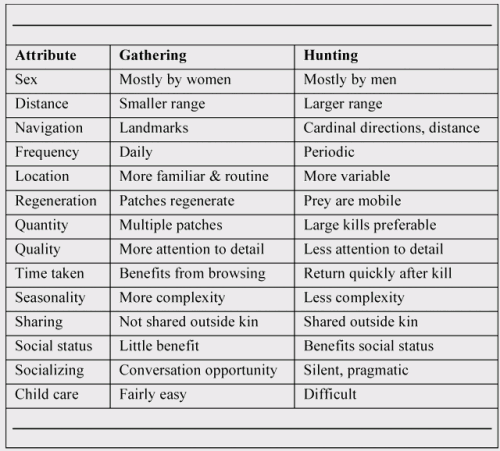 I will stipulate that every single cell in that table is true. I’ll go further and stipulate that the correlation with the sexes is absolute and perfect: in all hunter-gatherer societies, women never hunt and use those hunting skills, and men never gather and use those gathering skills. I’m not an anthropologist, so that table could be totally crackers and there could be a thousand exceptions, but I’m not going to worry about it; we’re stacking the odds to favor the evo-psych hypotheses as much as possible right now.

Further, I will stipulate that many of those skills are biologically based and founded on genetically determined cognitive abilities, and that they have no overlap. That is, for instance, hunters need a theory of mind that is built on an elaborate cortical substrate in order to more efficiently predict the behavior of prey; this ability is not used by gatherers when they’re searching for tubers. Gatherers, on the other hand, need very precise sensitivities to color and nuances of shape to assist in pattern-matching while searching, abilities that hunters do not use.

I will also stipulate that these specific cognitive and perceptual abilities have no utility outside hunting or gathering. There are no social circumstances, for instance, in which these abilities might be an exaptation.

Finally, I stipulate that the circumstances that produce these adaptations are still relevant today, and that 95,000 years of human evolution in hunter-gatherer societies completely dominates and makes irrelevant the last 5,000 years of evolution in agricultural and urban societies; we can ignore any processes that might have undone prior adaptations.

Is that enough yet? Have I given enough of the store away? ‘Cause I’m really feeling a little psychic stress here, since giving up some of those premises makes me want to claw them back and stab them a few times, until they’re bleeding and dead. But I’m playing the game, let’s give evo-psych every possible advantage, and grant them every assumption they make as a default.

Every hunting man had a gatherer mother; every gathering woman had a hunting father.

Seriously, it’s this feeling that I have to remind them that they’re not dealing with two species, Man and Woman, or even two populations, the man-tribe and the woman-tribe, but one goddamned species, obligately breeding within themselves. If there is a ‘spatial navigating gene’, both men and women have it. If there is a gene that grants us the color sensitivity to distinguish puce from plum, we all carry it. With the exception of a minuscule number of genes involved in sex-specific trait determination on the Y chromosome, we’re sharing everything.

Wait, the naive among you are wondering, does that mean men are carrying genes for large breasts, wide hips, and ovaries, while women are carrying genes for baldness, baggy scrotums, and testicles? Yes, we are. All shared. But these genes are also regulated so that they are expressed or repressed differently in the different sexes. You have to think of each one as a Gene Plus: a gene plus an added switch to turn it on or off differently in different sexes (commonly, they’re regulated differently by the presence or absence of testosterone.)

In most of these reproductively relevant sex differences, it’s easy to understand what maintains the Plus; a man whose testes did not see the signal to make male-specific gonads and instead produced some very confused ovaries would be a reproductive failure. Some of the secondary characteristics are only weakly maintained — breast size, for instance, doesn’t seem to be a major factor in reproductive success, and we see a large variation in that parameter…but there are stronger pressures that have maintained lactation, and so that function is more reliable (but not invariant!)

This is the problem for the evolutionary psychology of sex differences: for each trait that you want to claim is a product of selection for a behavior that is different between sexes, you have to postulate a Plus that restricts its expression to a single sex.

So, sure, tell me that humans evolved cognitive mechanisms to aid in navigating by landmarks for better fruit and tuber searching, and I might well believe it to be reasonable; now tell me why you think it would only operate in women, and how it would be actively suppressed by genetic mechanisms in men. Then you can tell me why navigating by distance and direction is actively shut off in women. You’re the ones who like purely adaptive explanations: why would there be an advantage to individuals having each only half the suite of potential genetic navigation tools switched on?

And then you can go through each line in the table up above and explain how confining each of those abilities to only one sex or another led to more babies being made than if both had it, and how having that trait in an ‘inappropriate’ sex would be culled by death or reduced fertility…because you know that’s how evolution works, right?

Right about then, my inner pluralist will come roaring back to life, and I’ll have to point out that your feeble rationalizations, even if I were to accept them, can only represent tiny fitness effects, and that in small populations of humans drift is going to dominate over small fitness coefficients, and selection won’t even see your hypothetical advantages. And maybe you don’t understand how evolution works, after all.

I think a better answer is that there are evolved human traits that are shared among every individual in the population without regard to sex, and that culture acts as the repressor/enabler of particular attributes in particular individuals. That ought to be the default assumption, with exceptions requiring exceptional evidence beyond just reading the cultural codes. Change the culture, and all those fully human abilities can be expressed in everyone, not just the ones permitted by convention.

Anything else is a betrayal of our potential.