One creationist claim that’s commonly laughed at is this idea that 8 people could build a great big boat, big enough to hold all the ‘kinds’ of animals, and that those same 8 people were an adequate work force to maintain all those beasts for a year in a confined space on a storm-tossed ark. So the creationists have created a whole pseudoscientific field called baraminology which tries to survey all of taxonomy and throw 99% of it out, so they can reduce the necessary number of animals packed into the boat. Literally, that’s all it’s really about: inventing new taxonomies with the specific goal of lumping as many as possible, in order to minimize the load on their fantasy boat.

In the past, I’ve seen them argue that a biblical ‘kind’ is equivalent to a genus; others have claimed it’s the Linnaean family. Now, Dr Jean K. Lightner, Independent Scholar (i.e. retired veterinarian), has taken the next step: a kind is equivalent to an order, roughly. Well, she does kind of chicken out at the Rodentia, the largest and most diverse group of mammals, and decides that those ought to be sorted into families, because otherwise she’s reducing the number of animals on the ark too much.

Given the characteristics that unite this order and the controversy in suborder classification, one could argue that the obvious cognitum is at the level of the order. Given my personal observations of squirrels and rats, which usually are placed in different suborders (except on the dual suborder scheme where they are both in Sciurognathi), I find this suggestion appealing. However, for the purposes of this project the order is too high for such a diverse group without considerably more evidence. For this reason the level of the kind will be considered to be at the level of the family.

She needs “more evidence” to be able to squish all of the rodents down to one common ancestor 4,000 years ago! You know, there’s no evidence given anywhere in the paper: it’s just a series of abbreviated descriptions of each order (or, for the rodents, family). She made this determination by looking at photos on the web. That’s it. She comes to the conclusion that only 137 kinds of mammals had to be on Noah’s Ark (350, if you count extinct species, which of course she should — Ken Ham is adamant that all kinds were on the ark).

In this paper 137 kinds have been tentatively identified. If the fossil record is taken into consideration, this number could easily double. Beech (2012) listed terrestrial vertebrate families represented in the fossil record. In the list of mammals 210 to 218 families are not recognized here. This suggests that closer to 350 mammal kinds were on the Ark. The large number of extinct families may be partially from a tendency for paleontologists to be splitters. However, much of it reflects the fact that a large amount of the diversity previously found in mammals has been lost.

In this serious attempt to quantify the kinds represented on the Ark, the numbers which resulted are lower than many had anticipated. Previous work had estimated the genus as the level of the kind, knowing this would significantly overestimate the number, in order to emphasize that the Ark had sufficient room for its intended purpose (Woodmorappe 1996). In discussing the results of this study with other creationists, many are surprised at how incredibly spacious the accommodations on the Ark would have been. In any case, this work is a reminder we have a Creator who cares for His creation and, even in judgment, He provides a way of salvation to those who will trust in Him.

Ah, that spacious ark. “Only” 350 mammals had to be cared for by those 8 custodians, and she hasn’t considered the birds and reptiles and amphibians yet. Of course, that’s still a lot of poop to shovel…except she seems to have solved that problem, too.

Here’s the quality of her scholarship: this is one of her kinds, the greater gliding posum. Look carefully at that photo. Notice anything odd about it? 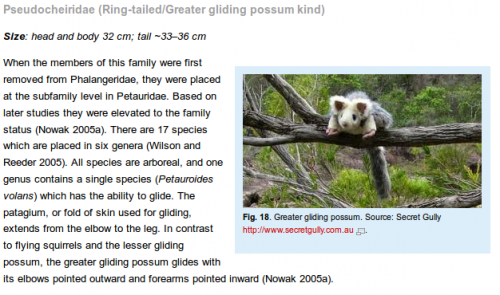 Maybe you’d like a closer look to be really sure. RationalWiki noticed this peculiarity. 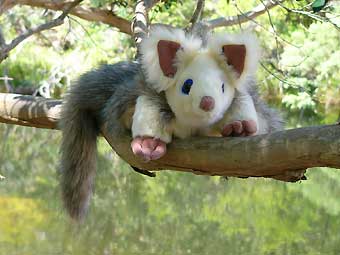 Hmmm. It reminds me of the time we found that Harun Yahya was using photos of fishing lures to illustrate modern insects. What great science!

But it does solve a lot of problems if the ark were stuffed full of plushies! It’s also a phenomenal marketing opportunity — the museum will be the gift shop!

Only manly men are permitted in the American Taliban » « Fire up iTunes now!