Look at this long line of people in Australia. 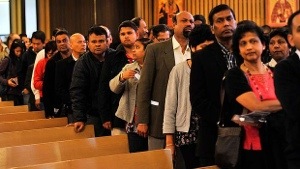 They’re queued up to gaze in wonder at the 500-year-old mummified right forearm of some Catholic saint. I’ve got a few things I’d want to ask them.

“What the hell is wrong with you people?”

“Do you really think fragments of corpses have magic powers?”

“Are you aware that many people find Catholics extremely creepy? Do you have any hypotheses about why that would be so?”

“Is it true that later tonight you’ll be burrowing in the local cemetery to feast on the decaying flesh of the dead?”

One good thing about The Oatmeal » « Brace yourself, Spain!