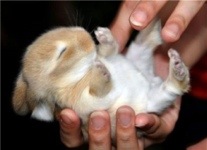 This is the lounge. You can discuss anything you want, but you will do it kindly. Think fluffy bunnies.