That man is a dangerous lunatic. He’s got a theological dedication to insisting that the US must be run exclusively by the 18th century principles of the Founding Fathers — even when he’s willing to consider limitations on the ownership of weapons, he gives it an unbelievable twist.

The justice explained that under his principle of originalism, some limitations on weapons were possible. Fox example, laws to restrict people from carrying a "head axe" would be constitutional because it was a misdemeanor when the Constitution was adopted in the late 1700s.

What the hell is a “head axe”, I wondered. So I looked it up. Here’s a picture: 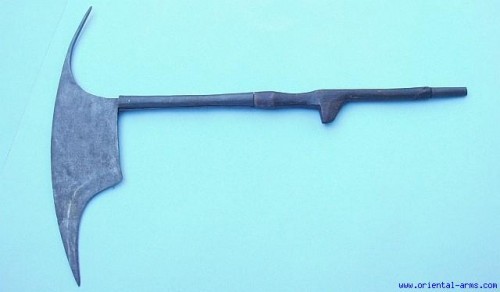 OK, that looks nasty. I’m glad the Supreme Court will think that casually carrying around a deadly looking thing like that is not reasonable behavior.

But then look where his reasoning takes him:

"What about these technological limitations?" Wallace wondered. "Obviously, we’re not now talking about a handgun or a musket, we’re talking about a weapon that can fire a hundred shots in a minute."

"We’ll see," Scalia replied. "Obviously the amendment does not apply to arms that can not be hand-carried. It’s to ‘keep and bear’ so it doesn’t apply to cannons."

Oh, good. We can restrict people’s ownership of cannons…because he interprets the Constitution with a Ken Ham-like literal-mindedness that says the only weapons that count are carried.

"But I suppose there are handheld rocket launchers that can bring down airplanes that will have to — it’s will have to be decided," he added.

So no head axes, and no artillery…but the right to keep and bear arms can be extended to fucking rocket launchers.

I give up. Our legal leadership consists of brain-damaged, narrowly literal-minded amoral morons who worship an 18th century scrap of paper.