The Council for Secular Humanism has posted a most revealing analysis of church finances in the United States. It’s excellent — if only all our politicians would read and grasp it. Religion is a gigantic money pit.

First, the authors point out that the idea that churches deserve their money because they are non-profit charitable organizations is a myth. I wouldn’t donate money to an organization that was this wasteful.

Do religions engage in charitable work that addresses the physical needs of the poor? Many do, but that is not their primary focus. Religions are quick to trumpet when they do charitable work—ironically for Christians, since the Bible explicitly says not to (Mathew 6:2). But they don’t do as much charitable work as a lot of people think, and they spend a relatively small percentage of their overall revenue on such work. For instance, the Church of Jesus Christ of Latter-day Saints (the LDS or Mormon Church), which regularly trumpets its charitable donations, gave about $1 billion to charitable causes between 1985 and 2008. That may seem like a lot until you divide it by the twenty-three-year time span and realize this church is donating only about 0.7 percent of its annual income. Other religions are more charitable. For instance, the United Methodist Church allocated about 29 percent of its revenues to charitable causes in 2010 (about $62 million of $214 million received). One calculation of the resources expended by 271 U.S. congregations found that, on average, “operating expenses” totaled 71 percent of all the expenditures of religions, much of that going to pay ministers’ salaries. Financial contributions addressing the physical needs of the poor fall within the remaining 29 percent of expenditures. While these numbers may be higher as a percentage of income than typical charitable giving by corporations, they are not hugely higher (depending on the religion) and are substantially lower in absolute terms. Wal-Mart, for instance, gives about $1.75 billion in food aid to charities each year, or twenty-eight times all of the money allotted for charity by the United Methodist Church and almost double what the LDS Church has given in the last twenty-five years.

They also point out that the churches are incredibly poorly regulated — which is probably one of the reasons they are so popular among grasping frauds. They do give out a few unfortunate ideas, though.

What this means is that donations to religions are largely unregulated. In our discussions while investigating the subsidies to religion, we realized that religions would be the ideal way to launder money if you were engaged in an illegal enterprise. Hypothetically, the leader of a drug cartel could have one of his lieutenants start a church and file for tax-exempt status. Once granted, money from the sale of drugs could then be donated to the religion, which could use the funds to build extravagant buildings (including a “parsonage”), host extravagant “services” (a.k.a. parties) for members of the religion, and pay extravagant salaries to its ministers (including the leader of the cartel). Drug money could be laundered through the church’s bank accounts with little risk of being caught by authorities. If drug cartels and the Mafia aren’t already doing this, we’d be surprised.

Yeah, I wouldn’t be surprised, either. If you want to make money disappear, run it through a church — no one will ever question it or look deeper into it (except those damned atheists.)

But now, the big bottom line: exactly how much money is religion sucking out of our pockets for no purpose whatsoever? 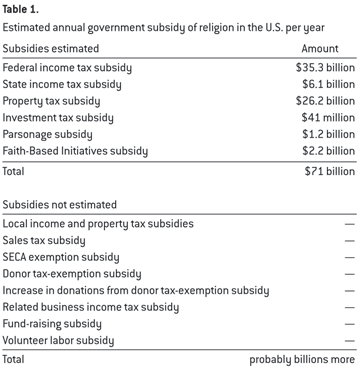 More than $71 billion. To put that into context, the authors mention that US agricultural subsidies, which are huge, are about $180 billion.

They mention that if Florida, for instance had just revoked the property tax exemption for religions, it would have brought in a few billion dollars that would have prevented their recent major cuts in police and firefighting, and their slashing of the education budget.

Except, let’s get real here: removing the subsidies wouldn’t suddenly bring in piles of cash; instead, it would probably kill a lot of the parasitic churches.

If these subsidies were removed—though we have no basis for believing that they will be anytime soon—we wonder what the damage to religion would be. There is evidence that donations to religions are tied to taxes; as the tax benefit of donating goes up, so do donations and vice versa. In other words, it seems likely that the removal of these subsidies would result in a substantial decrease in the supply of religion in the United States. To what extent it would affect demand for religion is uncertain.

Let’s do the experiment and find out.

A totally unbelievable fantasy » « Good on ya, Australia