I think I understand now why some less-than-appropriate speakers are appearing at the Reason Rally: those are the siesta breaks.

I owe this revelation to a church sign. Just turn your brain off for five minutes turn to your neighbors and start a conversation, just cool off and ignore the bozo on the screen. 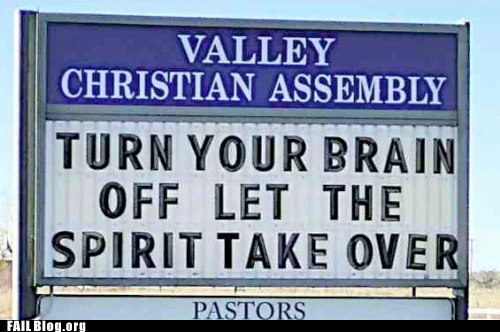 Also as I’ve been learning on twitter and elsewhere on the blogosphere, this event is not one where atheists stand up and let their values shine, it’s one where we’re supposed to bow and scrape and show that we can be accommodating to senators and other assholes.

But what if I don’t want to get along with them? What if I want us to change the world?