Jen mocked this argument that Dave Futrelle highlighted on his blog. Some wacko MRAs have been diagnosing Sandra Fluke as being a lesbian with higher than normal levels of testosterone because, they say, she has “man hands”: they’ve looked at some photos of her hands and have subjectively determined that her ring finger is too long.

her ring finger is quite a bit longer than her index. It’s almost as long as her middle finger. In general, a low 2d:4d ratio in women indicates a greater proclivity towards homosexuality or bisexuality and greater tendency towards aggressiveness and assertiveness. So, yeah, pirate fits.

I hate this shit.

It’s really bad science — it’s not even science — and reflects a very poor understanding of the evidence. Yes, it is true that there has been an observation that men have relatively longer 4th digits (ring finger) compared to 2nd digit (index finger) than women. But let me show you the actual, real, quantitative raw data on this metric. 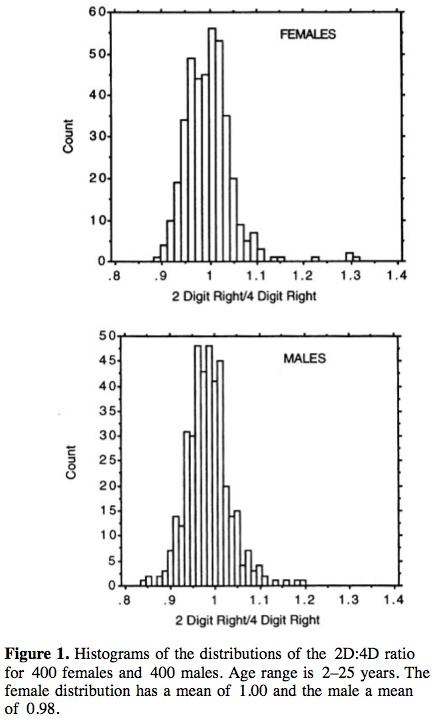 There is a statistically significant difference between those two distributions. You’ve gotta trust the math: P=0.0002. The male average ratio is 0.98, or that the index finger is 2% shorter than the ring finger, and the female average ratio is 1.0, or the two fingers are essentially identical in length.

But look at the variation! If you were given a blind assortment of ratios, you would not be able to reliably estimate the sex of the individuals. Yeah, sure, if it were a game in a casino, over many trials you might be able to make money at it, but as a guide for one on one sex determination, it sucks.

But, you say, isn’t there a reported correlation between digit length ratios and testosterone? Yes indeed there is, in men. Not in women, obviously. And here’s the raw data on that: 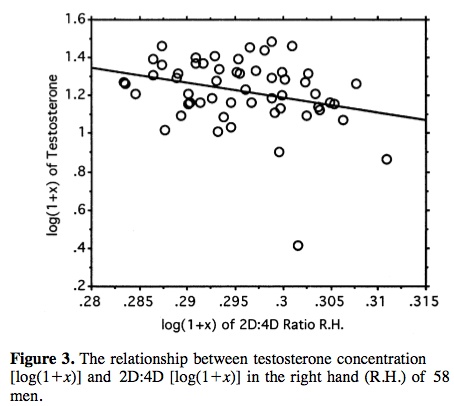 There is a statistical bias in the distribution, but really, if I told you the lengths of my fingers, you would not be able to use that to make significant estimates of my testosterone levels…and these differences are tiny relative to age-related changes anyway. We do not turn into women in our old age, though.

It’s a peeve of mine, though, that too often it’s considered sciencey to ignore the variation, when that’s the most interesting and important part, and reduce everything to a mean or a trend. There are morphological differences between men and women — you may have noticed — and since they’re driven to a large extent by systemic differences in hormones that regulate growth and metabolism, it’s not surprising at all that there are subtle variations in details. The question is whether they are at all significant functionally or selectively, and there’s no evidence for that at all in these ridiculous digit length studies.