Valentine’s Day has always been a cheesy, awful little holiday. I remember the ‘parties’ in grade school — the ones where you were expected to give a cheap paper card to everyone, which made expressions of affection totally meaningless, and the way just neglecting to give one to the unpopular kids in class was a way to do a major snub. I learned all about the true meaning of passive aggressive on 14 February in second grade.

And sometimes, they were freakin’ racist. I remember the generic Native American caricatures in that linked post; I was swapping those cards in the 1960s, so I probably wouldn’t have seen anything wrong with portraying Native Americans as hatchet-wielding, pidgin-speaking, buckskin-wearing Caucasians, and the only thing that spares me from direct personal guilt is that I don’t think I would have bought valentines that didn’t have comic book superheroes on them (which was also kind of racist, too: they were all white, except for the one guy, who was emerald green.)

But this…this transcends awful. There was someone who once upon a time thought this was cute, and gave it to children. 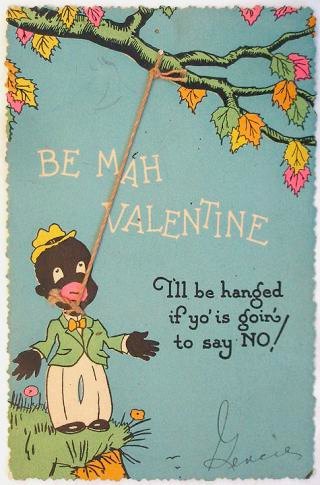 Because lynching is adorable.

Holy christ, but the United States is a screwed-up country with an ugly history.

There Will Be Blood? » « Why I am an atheist – Jonathan Judd