That sad article on gyres as an explanation for everything has had more fallout: not only has it been removed from Science Daily’s site, not only has Case Western retracted the press release, but one of the editors at the journal Life has resigned his position over it. The editorial board of the journal was completely surprised by the wretched content of the paper, which is not encouraging; apparently they exercise so little oversight at the journal that they were unaware of the crap their reviewers were passing through. One board member thinks it is a hoax, and laughed it off. Think about that; your shiny new journal has just published total garbage, and instead of being brought up short and questioning the quality control of the review process, you think it is amusing that what you consider an obvious hoax slipped in? There’s something seriously wrong there.

Add this to the list of failures at Life: the paper immediaely after Andrulis’s is this one, “Is Life Unique?”, by David Abel. Guess what? It’s Intelligent Design creationism crap. Here’s the abstract:

Abstract: Is life physicochemically unique? No. Is life unique? Yes. Life manifests innumerable formalisms that cannot be generated or explained by physicodynamics alone. Life pursues thousands of biofunctional goals, not the least of which is staying alive. Neither physicodynamics, nor evolution, pursue goals. Life is largely directed by linear digital programming and by the Prescriptive Information (PI) instantiated particularly into physicodynamically indeterminate nucleotide sequencing. Epigenomic controls only compound the sophistication of these formalisms. Life employs representationalism through the use of symbol systems. Life manifests autonomy, homeostasis far from equilibrium in the harshest of environments, positive and negative feedback mechanisms, prevention and correction of its own errors, and organization of its components into Sustained Functional Systems (SFS). Chance and necessity—heat agitation and the cause-and-effect determinism of nature’s orderliness—cannot spawn formalisms such as mathematics, language, symbol systems, coding, decoding, logic, organization (not to be confused with mere self-ordering), integration of circuits, computational success, and the pursuit of functionality. All of these characteristics of life are formal, not physical.

It’s drivel. The whole thing is one long windy argument from assertion, as in the penultimate sentence above, which is simply the bald claim that higher order functions of human functions like cognition cannot be derived from chemistry and physics. The paper itself contains no data at all — no experiments, measurements, or observations — but it is full of novel acronyms. Apparently, all you need to do to make it as a big time creationist is to make up new words and phrases and string them together. I checked out some of his other papers — he seems to be some kind of computer science guy, and this is all he does, is write impenetrably glib papers full of pretentious acronyms, posing as an expert on biology while saying nothing credible about biology at all.

But he certainly has an impressive address and affiliation!

Whoa. Sounds major. Unfortunately, I’ve never heard of this foundation, and all I could find out about it is a webpage in which they announce a million dollar prize for “proposing a highly plausible natural-process mechanism for the spontaneous rise of genetic instructions in nature sufficient to give rise to life.” This sounds suspiciously like standard creationist dodging — they’ll never have to award this prize. So I looked at their judging, and at first glance it seems impressive: they have over 200 judges, including Jack Szostak, Peter Atkins, Paul Davies, and Edward O. Wilson. But then, they mention that judging will be in 5 tiers, and only the ones that pass all other reviews will reach the Nobel prize winners and famous scientists…and the first tier is an “in-house review”. I suspect the big names will never be pestered by this prize committee. Actually, I wonder if most of these judges know that their name is on this list. Maybe you should look in case you’ve been drafted.

I started wondering about this “in-house staff” who would be doing the initial judging, and about the Origin of Life Science Foundation itself. It’s awfully hard to track down — its only web presence is the prize page, and its only employee seems to be…David L. Abel. So I looked it up in google maps to see where the foundation’s majestic headquarters might be. 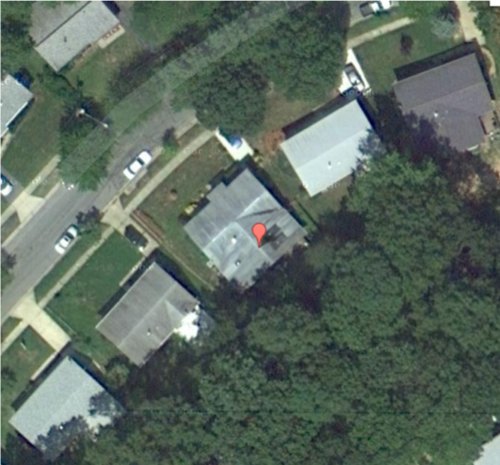 It’s a house in a residential neighborhood of a Maryland suburb. It made me wonder if maybe the Department of ProtoBioCybernetics was located in the master bathroom, while he Department of ProtoBioSemiotics was in the hall closet, or whether both were consolidated into a sunny corner of the kitchen. At least it seems to be a step above Patriot University, but it’s still some guy’s house that he’s calling a Foundation with multiple implied Departments with fancy titles.

That’s not all! Mr Abel seems to be a linchpin of the Intelligent Design movement, who manages to work his rambling, incoherent publications into all kinds of journals. In fact, the Discovery Institute just bragged about all their peer-reviewed scientific publications, and there, in their list of over 70 works published over the last 25 years or so, which includes papers by such famous scientists as William Lane Craig and John A. Davison, and prestigious journals like Rivisti di Biologia and their own in-house pet journal, BIO-Complexity, and also seems to include books that were not peer-reviewed at all, are twelve papers by Mr Fancy-Titled-Suburban-House. 17% of the Intelligent Design creationism movement’s ‘scientific’ output comes out of that dwelling in Maryland.

I’d love to see the gigantic laboratory he must have in there.

For your edification, I’ve included the official complete list of Intelligent Design creationism’s publications below the fold. It’s an impressively short list of hackery.

And may I suggest that the journal Life has deeper problems than simply accidentally allowing one bad paper to slip into publication? I think it needs a negative impact factor.