The Fordham Institute has released their annual evaluation of state science standards. They are very tough graders — Minnesota got a “C”. Ack! Mom & Dad are going to be pissed, how will we ever get into a good college at this rate? 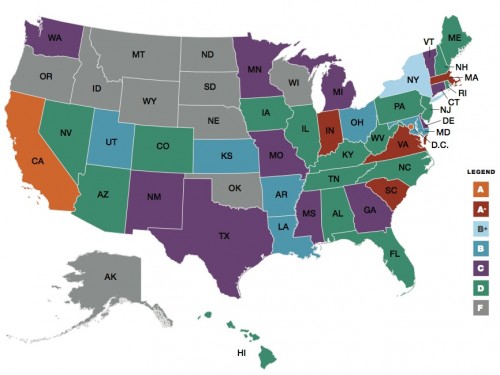 The Institute does a fairly thorough breakdown, so there are some bright spots: Minnesota is doing a good job in the life sciences, but where we got dinged hard was on the physical sciences, which are “illogically organized” and contain factual errors. Here’s the introduction to their evaluation of our life sciences standards:

Important life science content is presented quite minimally, but the flow and logic are such as to convey an understanding of the concepts rather than coming across as a list of topics to check off. The inclusion of examples from Kindergarten through eighth grade helps to further explain what students should know and be able to do.

Minimal is OK, as far as I’m concerned; it think it’s more important to get across a solid conceptual understanding. Of course, given that some teachers do a very poor job of getting those concepts across, more specific guidelines might be useful.

What’s really awful about our C, though, is that that’s the same grade Texas got. Oh, the ignominy!

I think we got robbed, though. The detailed breakdown says that a major problem is inconsistency: some bits of the Texas standards are stellar, others are terrible; different grade levels get variable quality of coverage. Texas gets slammed for life science standards that are “woefully imbalanced, with poorly developed material in the early grades and strong, sometimes excellent, content in the upper levels.” The major flaws are entirely predictable.

Perhaps the biggest problem with the middle school standards, however, is their coverage of evolution. For instance, the seventh-grade standards mention the Galapagos finches, giving the impression that the Darwinian paradigm is being presented. Unfortunately, it is not. Instead, the example of the finch Geospiza fortis apparently refers to studies by Peter and Rosemary Grant on beak size in this species, made widely known by Jonathan Weiner’s Pulitzer Prize-winning book, The Beak of the Finch. Creationists often distort these important findings to argue that Darwinian macroevolution does not occur—instead, microevolution does. In addition, the word “evolution” is never used in any of the middle school standards, and the term “natural selection” is never explained.

What’s really telling, though, is the reactions. I just told you I’m disappointed with Minnesota’s “C”; we can do better, and I hope the next round of standards will improve ours to an “A”. In Texas, creationist kook Don McLeroy was happy with his “C”.

McLeroy told the Texas Independent he is “very pleased” with the study and believes it only serves to validate the role he and the conservative bloc played in crafting the standards.

“The work of religious conservatives has been vindicated,” he said, pointing to the report’s positive review of high school evolution standards. When asked about the poor evaluation of middle school standards, McLeroy said blame could fall on the writing teams and review committees and/or the whole board who could have stepped up to improve them. “In the end, what we wrote was legitimate, sound science and the study proves it.”

That is so completely backwards. The weaknesses in the standards are the direct result of the meddling corruption of science pushed by the religious conservatives on the board; everything the Fordham Institute said was bad about their standards were the points the creationists pushed. The strengths are the product of the motivated, hard-working scientists and educators who fought against the religious conservatives. McLeroy can take credit for that “C” in the sense that it could have been an “A” if he and his fellow travellers in superstition had been kicked out of the process…and that’s nothing to be proud of.