Take a look at the ad copy for this evil book by a friend of Meryl Dorey, the anti-vaccination kook. 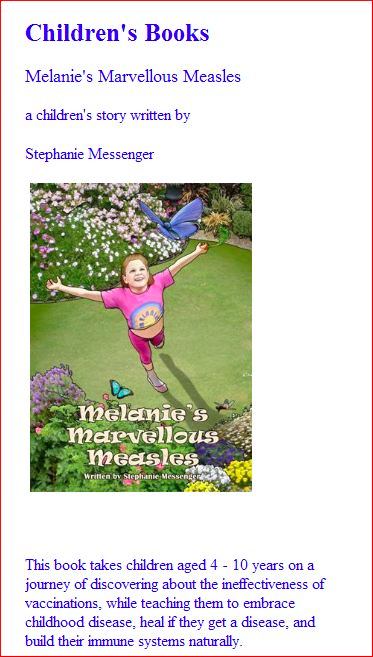 “Marvellous measles”? “Embrace childhood disease”? This is rank madness. Here is what WHO says about measles:

Measles kills children. The reason these loons can babble about measles as if it were a harmless game that strengthens your immune system is that world-wide vaccination campaigns have been so effective in reducing the incidence of the disease, and because children who are healthy and have good nutrition are very likely to survive it. So what Stephanie Messenger and Meryl Dorey propose to do is to put sick, immuno-compromised, and hungry children at far greater risk of death, and make their own spoiled children miserable and contagious for a few days to a week, and also put them at a lesser risk of death, all so they can smugly promote their hare-brained cause.

Something else that irritates me about these people is that often they align themselves with the left — it’s gormless liberals who readily buy into this nonsense. Another scandal developing in Australia is that the Woodford Folk Festival has invited Meryl Dorey to speak. It looks like a big event, and there among the environmentalists and local foods proponents and polynesian and aboriginal singers, is this great stinking turd of a woman advocating infecting small children with awful diseases. This Meryl Dorey:

She has described measles (the disease which has killed more children than any other in the history of the world) as “benign;” she suggested the slogan “Shaken Maybe Syndrome” as a way of implying that Shaken Baby Syndrome does not exist but is always damage caused by vaccines; she provided strong support to a man imprisoned in the US for the murder of a ten-week-old boy, her support being based on the idea that the dreadful injuries to the child had to be the effects of a vaccine, not the actions of a violent man; she is on record as an AIDS denier; she said on television that “whooping cough didn’t kill us thirty years ago and it’s not kill anybody today”. If she isn’t implacably opposed to vaccinations then she hides any other position well.

The festival sounds like fun, but if I were in the region, nothing could persuade me to attend — it’s poisoned through and through by its endorsement of a child-killing monster who will be given a stage to lie from.