Have fun and go visit the Missing Universe Museum online. You will feel as if you are finally getting close to the bottom of human stupidity.

Every page promotes this argument:

If you don’t believe God created all living things, male and female, in 6 days….
How many millions of years was it between the first male and the first female?

It’s idiotic when Ray Comfort says it, and it’s just as inane when whoever put this website together says it.

I had to stop and close the web page at the sight of this, their argument against vestigial organs. You see, if evolution were actually true, and vestigial organs actually existed, then we’d all look like this: 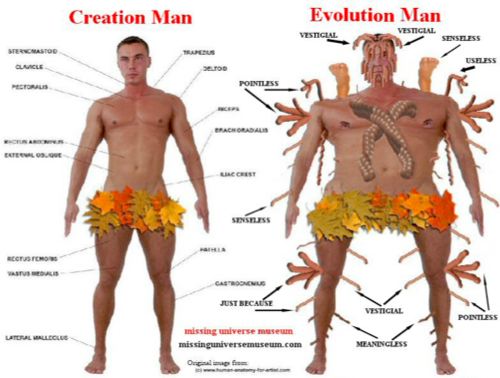 I’m baffled. Why would anyone imagine that a prediction of evolution is that humans should be covered with penises?

I had to add one more thing: their evolution test.

Students, give this test to your teachers. When they fail it, ask them why they are teaching this nonsense!

Teachers, give this test to your students if you really want them to know the truth about evolution!

1. Which evolved first, male or female?
2. How many millions of years elapsed between the first male and first female?
3. List at least 9 of the false assumptions made with radioactive dating methods.
4. Why hasn’t any extinct creature re-evolved after millions of years?
5. Which came first:
…the eye,
…the eyelid,
…the eyebrow,
…the eye sockets,
…the eye muscles,
…the eye lashes,
…the tear ducts,
…the brain’s interpretation of light?
6. How many millions of years between each in question 5?
7. If we all evolved from a common ancestor, why can’t all the different species mate with one another and produce fertile offspring?
8. List any of the millions of creatures in just five stages of its evolution showing the progression of a new organ of any kind. When you have done this, you can collect the millions of dollars in rewards offered for proof of evolution!
9. Why is it that the very things that would prove Evolution (transitional forms) are still missing?
10. Explain why something as complex as human life could happen by chance, but something as simple as a coin must have a creator. (Show your math solution.)
11. Why aren’t any fossils or coal or oil being formed today?
12. List 50 vestigial or useless organs or appendages in the human body.
13. Why hasn’t anyone collected the millions of dollars in rewards for proof of evolution?
14. If life began hundreds of millions of years ago, why is the earth still under populated?
15. Why hasn’t evolution duplicated all species on all continents?

Finals week is next week. Should I give that to my intro students?

There is a rumor going about that Pharyngulistas are getting soft » « Oh, look: I’m in Open Lab 2011!