This is awful: Rick Perry’s Texas A&M Transcript is now available online. He was a pre-vet student in college? Unbelievable. This is a fellow wobbling between a C- and a C+ average from term to term. As an advisor, I would have taken this poor student aside in his second year and explained to him that veterinary school is really, really hard to get into — even harder than medical school — and with his grades he didn’t stand a chance of getting in, and even worse, he demonstrated no aptitude at all for the field. I would have recommended that he switch majors and pursue some field that doesn’t require much math and science, instead of limping along to barely squeak through with a degree in a field he’d never be able to pursue further.

And I guess he did that anyway, going into a career that any dumbass can do, Texas governor. 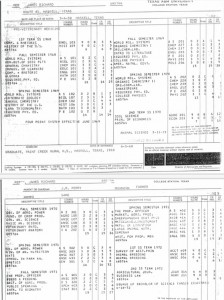 No wonder he can prate about disbelieving evolution: he’s got negligible biology in his education, and he barely passed what little he took.

Do we need another dumb Texan for president? » « It’s going to be a long election season…