In 2009, I was working as a contractor ecologist for the Endangered Resources division of the Wisconsin Department of Natural resources. Specifically, I was part of a team that was doing a population survey for several kinds of snake, including two species of garter snake that are currently listed as “special concern”. 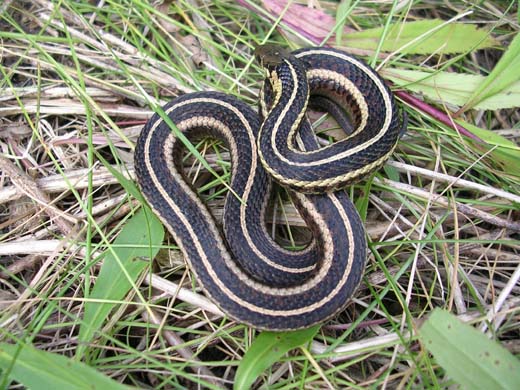 Part of the work we were doing was to just get a feel for the overall snake community in southern Wisconsin. In addition to the five garter snake species in Wisconsin (though we didn’t catch all of them, if memory serves), there were hognoses, brown snakes, ringneck snakes, and so on. We also recorded metadata – when and where each snake was caught, what the weather was doing, etc.

The primary goal of the work was to determine whether the Plains and Butler’s garter snakes should be reclassified as “endangered” in Wisconsin.

The history of endangered species is a grim one, and there’s a long-standing problem of people seeking out the last survivors, to collect them as exotic pets, or as trophies, or to kill them as obstructions to development. There’s also the problem of people wanting their “last chance to see” something that may soon cease to exist, which can hasten that extinction. All that being the case, researchers have to take some precautions. It’s bad for the general public to know exactly where they can find an endangered species, because the odds are very good that will result in the species going extinct, at least in that area.

For that reason, and because there’s rarely a public need to know, that information is generally exempt from Freedom of Information Act (FOIA) requests.

So, what would have happened if someone had asked for all documents relating to our research on garter snakes?

With such a general request, the first thing to note is that the person asking would be getting a lot of information about things that aren’t garter snakes, because those data were collected as part of the garter snake research. Because FOIA requests are legally binding (which is a good thing!), such a general request would mean that we’d have to turn over information that everyone knows would not be relevant to the Garter Snake Transparency Coalition (who I just made up), because everyone knows they don’t care about ringneck snakes. If they narrowed the request to information specific to garter snakes that would help, because it would mean we could automatically set aside documents on other species.

Even with that narrower request, however, we’d need to go through our documents to make sure that there is no way they could be used to pinpoint the location of an endangered population. We would also need to go through and remove people’s names. A lot of the sites where we caught snakes were on private property (including people’s basements!), which means we’d need to make sure those people’s names aren’t included in the released documents, as they have nothing to do with the GSTC’s request, and they have a right to privacy. Snakes, alas, have no individual right to privacy under U.S. law, so the best we can do is to give them collective privacy, when their numbers are small enough.

And remember – every snake had its location recorded, so we’d have to go through and make sure that the locations people ARE allowed to know were present, but the locations that have to be redacted aren’t.

In other words, complying with a request like that can be pretty labor-intensive, and absent a directive to stop doing our normal work, we’d have had to fit that process in around it all.

So, let’s talk about the Pfizer vaccine:

I’m bringing this up because the prediction in the video was accurate, and I’m starting to see the “75 years” line going around on Twitter. I agree with Beau that it’s a good idea for this information to be released. I agree that it would be good to expedite it. That said, it’s not something that can be done without a big shift in resources and personnel for the duration of the project.

This is not a small snake study, this is a massive amount of stuff on the creation and testing of a vaccine, which means that instead of the few hundred pages I might have had to process about snakes, there are estimated to be over 400,000 pages to go through. For example, the FDA will need to both include as much relevant information as possible about the people on whom the vaccine was tested, without violating their privacy – a consideration not afforded to the snakes.

As Beau said, the plaintiffs seeking the release of these documents do have the power to narrow the scope of their request to specific areas of concern, like adverse reactions, side effects, and efficacy. That would cut down on the number of papers the FDA team would have to go through. To me it seems a little suspect that they’ve apparently been unwilling to do so. Holding out for the whole thing seems almost designed to stir up outrage and controversy, and such a broad request does make me wonder if some of the people involved are hoping to comb through everything stuff that can be used out of context to support a talking point. This comment from a Reuters article on the subject does little to quell that worry:

Indeed, several of the plaintiffs – a group that now includes more than 200 doctors, scientists, professors, public health professionals and journalists from around the world – have publicly questioned the efficacy of lockdown policies, mask mandates and the vaccine itself.

While some members may have their own agendas, the group as a whole has pledged to publish all the information it receives from the FDA on its website and says it “takes no position on the data other than that it should be made publicly available to allow independent experts to conduct their own review and analyses.”

It also doesn’t help to have a Republican politician proudly displaying his ignorance of the scale of the request of the work that needs to be done to comply with it.

Earlier this month, Rep. Ralph Norman, R-S.C., introduced legislation that could force the FDA to release all documents relating to the vaccine within the next 100 days.

The legislation is a direct response to a request made last month by the federal agency to prolong releasing data on COVID vaccines for up to 55 years.

“How does a vaccine that receives approval in 108 days now require 55 years just to release information?” Norman said to Fox News. “It sounds like the beginning of a very bad joke.”

You’ll forgive me if I find the assessment of a conservative real estate investor to be less than useful in this case. I expect that there are people involved who do have legitimate interest in this, but it also seems that at least some folks are doing it for more political and self-serving reasons.

In case it needs to be said, the vaccine approval process is very different from the process of processing the documents generated BY that process. I also think that the urgency of getting a vaccine out during a raging pandemic is somewhat different from the urgency of getting every scrap of paper associated with vaccine approval out to the public.

I agree with Beau that they should do what they need to – bringing folks in from other departments, putting other projects on hold for a few months, and so on – to get this dealt with as soon as possible. That said, doing all of that isn’t going to happen overnight. It was never going to happen overnight. To me it seems entirely reasonable to say “this is how we normally do things, and this is how long this request will take, without changes at one or both ends of this process.” If there is a law passed or a court ruling mandating a faster turnaround, that will probably make it easier for the agency to get help and reassign resources, so I have no problem with the plaintiffs continuing to push. From what I can tell, this is just the beginning of a process, and the U.S. is set up in a way that requires an adversarial approach to things like this.

My problem is with the insistence that the scale of the request, and the response to it, are evidence of a coverup, rather than the first stages of a big task. I obviously can’t  say for certain that some of the people involved are bad-faith actors, but it wouldn’t be the first time freedom of information laws have been used for nefarious purposes. The time it takes to work out the logistics of this is being used to bolster anti-vax conspiracy talk, and that is a big problem. I think the only way to disarm that particular trap is to actually expedite the process. It’s likely that for some folks, it won’t be enough no matter how much is released. They’ll use any redactions as proof that “they’re hiding something”, and any delays as the same.

The reality is that things take work, and the public’s right to know – which again, I do think exists here – has to be balanced with rights to privacy, and (which I think is less legitimate) trade secrets. I want a very different world from the one we have now. I want things like vaccines to be open-source, and available to all without concern for profit. In case it’s not clear to my readers, “Big Pharma” is part of the capitalist structure I want to dismantle.

But we’re not there yet, and while we’re doing that work, we are also stuck with the work generated by the system we’re trying to replace.

Keep pushing for transparency, just don’t use the lack of instant gratification as an excuse to spread conspiracy theories.

Thank you for reading. If you find my work interesting, useful, or entertaining, please share it with others, and please consider joining the group of lovely people who support me at patreon.com/oceanoxia. Life costs money, alas, and owing to my immigration status in Ireland, this is likely to be my only form of income for the foreseeable future, so if you are able to help out, I’d greatly appreciate it. The beauty of crowdfunding is that even as little as $1 per month ends up helping a great deal if enough people do it. You’d be supporting both my nonfiction and my science fiction writing, and you’d get early access to the fiction.