Back in March I wrote about some progress that’s being made in the the use of renewable energy to split hydrogen from water, and on some issues and progress surrounding the transport and storage of hydrogen. One of the things that came up in the comments was the role hydrogen might play in replacing petroleum products as a source of power for air transit. While there are advances being made in batteries, and even solar-powered planes, the numbers don’t really work out well for the kinds of mass air travel on which our society relies. Hurling something weighing hundreds of tons across the sky takes a lot of power.

Those familiar with my work will know that I don’t believe we can rely on corporations to solve our climate problem, but since corporations currently control a huge portion of the world’s resources, research facilities, and means of production, any progress they make while we’re working to build a system that’s better than capitalism is good. In that vein, there are advances being made in the area of hydrogen-powered aviation that I find encouraging:

The approaches include a turbofan jet with capacity for as many as 200 passengers — similar to its A321neo narrow-body — that can fly more than 2,000 nautical miles, according to a statement Monday. It would be powered by a modified gas-turbine engine running on hydrogen.

The manufacturer also showed a design for a propeller plane which would seat about 100 passengers for smaller distances, and a flying-wing concept with 200 seats. 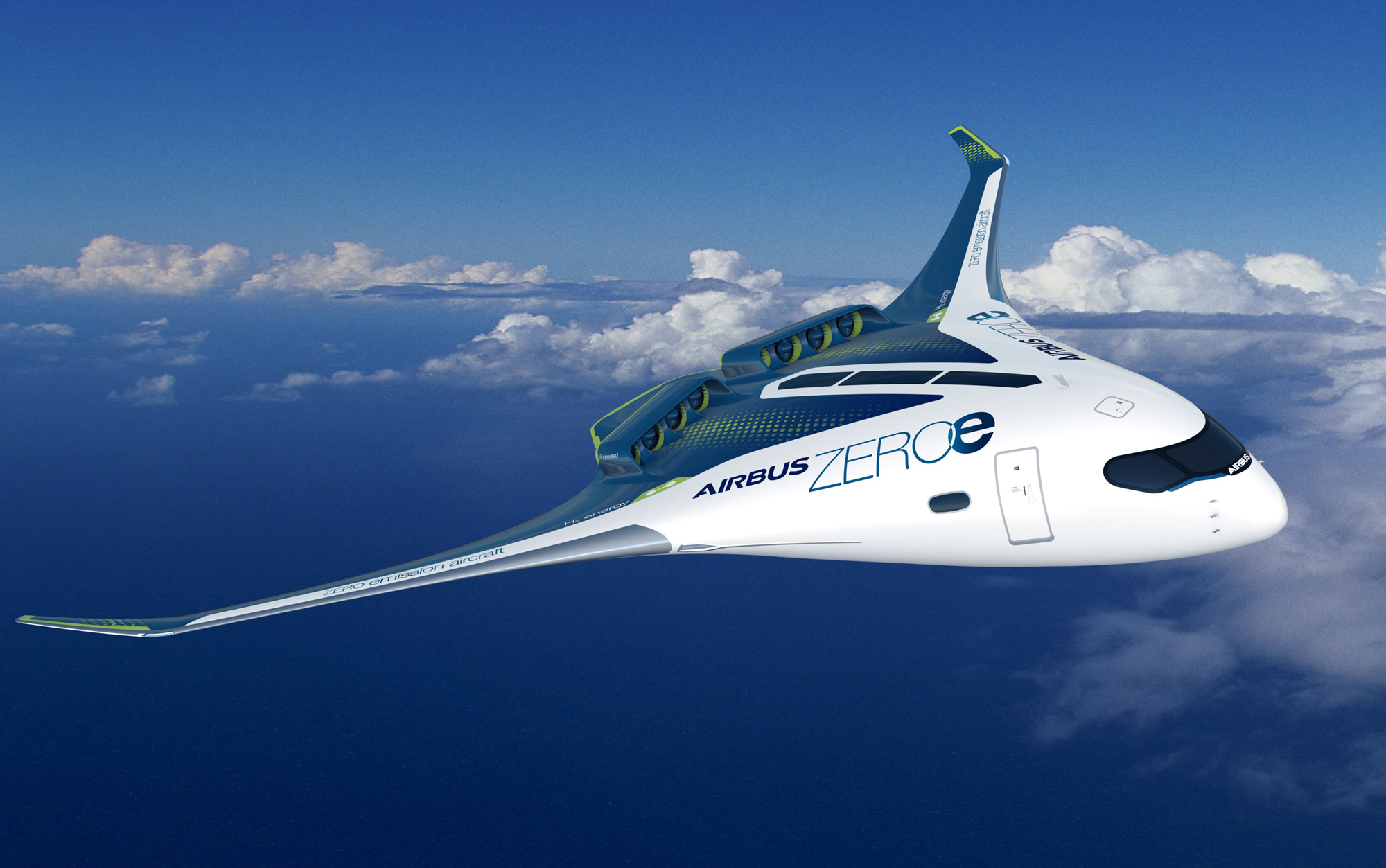 Hydrogen is becoming an increasing area of focus for Airbus as it evaluates technologies for emission-free flight. The company is under pressure from the French and German governments, its biggest shareholders, to speed development of new aircraft after aiding the planemaker during the coronavirus crisis. Together, the two countries have committed some 2.5 billion euros ($2.9 billion) toward cleaner propulsion.

While there are different approaches, hydrogen is likely to be used in aerospace and other industries to meet climate-neutral targets, Airbus said. The company has already said it’s targeting the mid-2030s for the first zero-emission passenger jet. Developing a hydrogen aircraft on that timeline will be a real challenge because of the massive amounts of infrastructure and government investment required.

“The question is how big can we go with batteries,” said Glenn Llewellyn, vice president of zero-emissions technology at Airbus, in a briefing. “We don’t believe that it’s a today-relevant technology for commercial aircraft and we see hydrogen having more potential.”

In the turbofan design, liquid hydrogen will be stored and distributed through tanks located behind the rear pressure bulkhead, while at the same time hydrogen fuel cells will create electric power that complements the gas turbine. The turboprop will also use modified gas-turbine engines.

The blended-wing plan, resembling a flying V, opens up new options for hydrogen storage and distribution, along with cabin layout. It is the most challenging out of the three designs, according to the company’s chief engineer, Jean-Brice Dumont.

If the company gets everything right immediately it can consider moving ahead with the “revolutionary” V-shaped model, he said. Otherwise it is likely to choose one of the other two, more classic designs and look at developing such an aircraft later.

As with most other climate-related changes we need to make, the infrastructure to support and fuel this sort of air travel will have to be built, and it’s likely that new problems will be discovered in the development of these machines. It would have been nice if this work had been started years ago, but better late than never. I have a feeling that as the climate warms, we’re going to need the option of fast air travel, not just to move people around for business, leisure, or evacuation, but also to move food and supplies around as various parts of the world deal with escalating climate catastrophes.

And it’s essential that the technology we use to survive what’s coming don’t actively contribute to making it worse. That goes for all forms of transit, for air conditioning, for food production – energy is going to be the central factor in every aspect of adapting to and surviving climate change. Generating it without increasing atmospheric greenhouse gas levels is non-negotiable.

I’m encouraged by this news. It’s not going to fix all or even most of the problem, but air travel has been a big hurdle to overcome in redesigning our civilization. It’s good to see what looks like real progress. I hope this pans out!

This blog, and its associated podcast, are brought to you by my wonderful patrons, each of whom gives to me according to their ability, that my household might eat according to our needs. If you would like to stand in solidarity with these people, and help support the work I’m doing, you can head over to Patreon.com/oceanoxia to join the Oceanoxia Collective. You have nothing to lose but your chains, and as little as $1 USD/month!