Last time I told the story of His Holiness, Saint Ray the Cat, and how he came to be in our lives. Today I present the senior non-human member of the household, Raksha. Waaay back in 2007, I had just graduated from college and was working as property manager for my school’s biology department. I was living with my then-girlfriend in Richmond, IN, and we had decided that we absolutely could not afford a dog. My Significant Other was volunteering at an animal shelter. It was the standard affair, full of stressed cats and loud dogs, and when I went to pick her up one day, there was this scrawny little puppy with great big ears who was the only one in the whole shelter that wasn’t barking. We re-assessed our finances, and brought Raksha home not long after. Raksha was timid, but very eager to please, and easy to train.

She found most things terrifying, and when confronted with other dogs, she would hide under the nearest table, car, or bush. Because she had a vaguely wolfy look, and I grew up reading Rudyard Kipling, I named her after the she-wolf who adopted Mowgli in The Jungle Book. At the time, I thought Raksha meant “demon” in Hindi (obviously with different connotations from the Christian usage of the term), and it wasn’t until some time later that I was corrected. It turns out that demon is actually “rakshas”, and my vicious hound was, in reality, named “defense” in Hindi, or “protect” in Bengali.

In time, she grew into her ears, learned how to get along with other dogs, and even overcame her intense separation anxiety and stopped howling every time I left the apartment. She kept her quiet habits, and only barks when someone knocks on the door. She has shared her home with cats at various points in time, and after the first one, quickly learned not to chase them. The first cat I had with Tegan, a tragically short-lived tiger cat named Erwin, fixated on her to a possibly unhealthy degree, to the point where he would have a meltdown every time we took her for a walk. At first the two of them would cuddle – Erwin would curl up between her front paws and fall asleep. In time, however, Erwin ruined that. He would start cleaning her ears, and then move from that to biting them. Raksha lost her trust, and ended up slinking away any time Erwin got too cuddly. Erwin, alas, had a heart condition that took him from us after just a couple years. His Holiness joined us a little under a year after Erwin’s death.

His Holiness was afraid of Raksha in the beginning, like any semi-intelligent street cat, but he was too sick to actually run away. Raksha continued not eating him, so he got over his fear, and they now maintain an amicable co-existence, usually at an arm’s length. Both of them have thrived in Scotland, enjoying the cool climate, and the great big window in the living room. Their favorite part of the day is when we open the window, and they can stick their heads out, watch passers-by, and sniff the breeze. 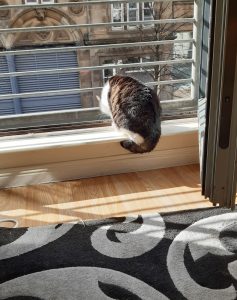 His Holiness, Saint Ray the Cat observes the world from his sun-washed balcony. 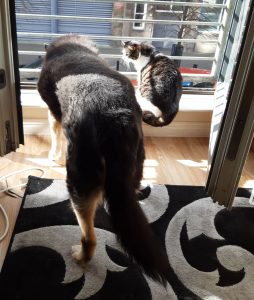 His Holiness turns to observe Raksha’s approach to the grand balcony. 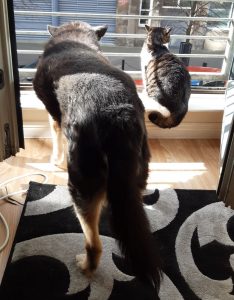 The two noble beasts observe the landscape from their lofty vantage point. The cool breeze carries fascinating scents to them, the sun warms their fur, and the people and birds are fascinating to watch. 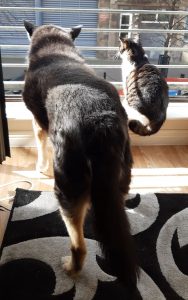 The alley and its breezes provide regular entertainment. 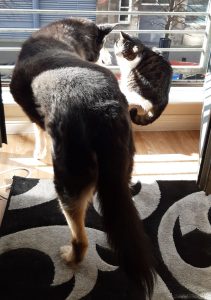 His Holiness and Raksha examine each other. His Holiness is realizing that perhaps his personal space has been invaded more than he’d like. 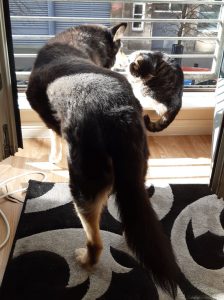 Yes, it is time. His Holiness has concluded his business on the balcony, and wishes to put some distance between himself and the endlessly sniffing snoot of the dog. 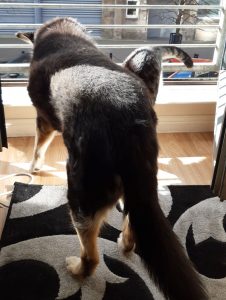 Raksha resumes her inspection of the outside world, as His Holiness slowly recedes from the balcony, walking a little bit under his large, shaggy companion. 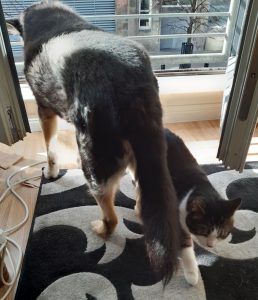 Raksha continues her vigil as His Holiness retreats into the interior of the apartment. 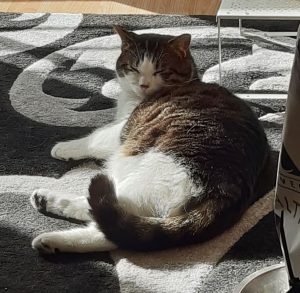 His Holiness basks in the sun coming through the now-closed window. The dog has left, leaving him in undisturbed tranquility. 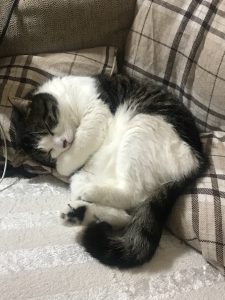 His Holiness curled up on the couch 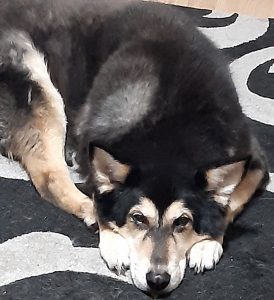 Raksha waiting for me to let her out. Life is hard for an old dog. 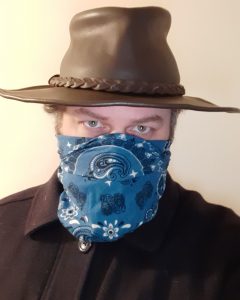 Bonus Picture! This is my pandemic shopping outfit. I went out today to pick up antidepressants and some groceries from the nearby Tesco.

Help us feed and medicate these noble animals! Sign up to be a patron at my Patreon page, so that we can afford rent, keep a roof over our heads, and keep the vicious beasts from eating us in our sleep!

Sources of aid for those who need it, 3rd edition » « Running the Gauntlet: COVID-19, Climate Change, and the Future