I thought that for this Saturday I’d share some pictures of my cat engaging in his third favorite activity. Then I couldn’t figure out how to upload the images, so you’re getting it today instead.

His Holiness Saint Ray the Cat had a troubled childhood. We think he lived under the house our apartment was in, back in Somerville, because whenever Tegan came home from work, there was this tiny, noisy kitten demanding attention.  In time, we ended up taking him in. He had Giardia, worms, and other such things. After taking him to the vet, we realized that as it was late autumn at that point, he was probably a couple weeks away from death. For the first couple weeks, all he did was eat, sleep, and poop. If you’re ever wondering what Giardia is like, I’m pretty sure this tiny little kitten pooped his own weight every day.

He was not a well cat.

The perkiness he had shown in demanding attention vanished as soon as he got inside. I think he decided that he was now safe, and being fed, and could focus on healing, and on his one true passion: sleep.

Once he got out of Giardia/flea quarantine in the bathroom,  he began exploring the apartment. He would toddle slowly for about 5-10 feet, then curl up on the floor wherever he had gotten and sleep for a while. Then he’d get up, get another few feet, and sleep again. It took him a few days to actually get a feel for the place.

One thing is certain – he decided that he was done with being outdoors. I’ve never had a cat that was so uninterested in leaving the apartment. He’ll look at the door if you leave it open. He even managed to get outside once, but he ran right back in. I think he was traumatized by his childhood. He’d been there, he’d done that, and he was committed to living the rest of his days as a very, very lazy indoor cat, a career he has pursued to this very day.

So for him, the only difference from the quarantine is that Tegan’s around more. Like me, he seems to like that.

And what is his third favorite activity? Well, after sleeping and eating (we have to regulate his diet, because his not-so-secret ambition is to become spherical), he likes sitting on the sill of our living-room window and gazing out at the wildlife of Scotland. By this I mean the rather pleasant alley between our apartment building and the one next to it, and the people, dogs, and magpies that frequent it: 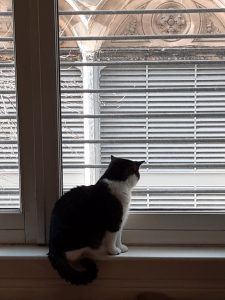 His Holiness gazes upon the unwashed masses 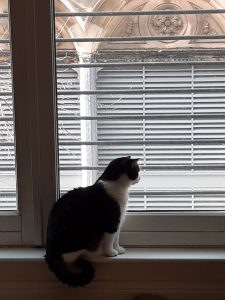 THOSE unwashed masses are BIRDS. St. Ray finds birds to be fascinating. 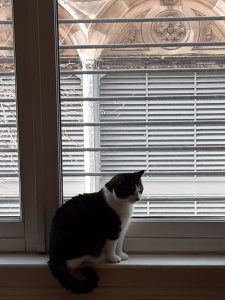 In which His Holiness contemplates the deeper secrets of the universe. How long has it been since he last ate? Is it time for food once again? Will we ever know?

Thanks to the COVID-19 outbreak, layoffs have increased, job interviews have been indefinitely postponed, and many places aren’t hiring new workers. All of that means I really need help paying my bills and keeping a roof over my head. Patreon.com is a way for you to help with that, even if it’s just a little bit, and get some perks and extra content in return. You control how much you give, and how long you give it, and every little bit really does help. When lots of people pitch in, it can make a huge difference. Please help if you’re able, and share my work with others. Thank you!